Within a market of subpar iOS peripherals, I didn’t expect to be impressed when Parrot announced they would be releasing a new flying toy with cameras on it and even built in video games that could be controlled via iPod or iPad.

However, what emerged is the AR Drone, an impressive flying machine that features all the things that were promised. The most important feature? Well, it works!

This simple fact that someone has made an incredibly ambitious peripheral that works is incredible. The even better thing is that it’s fun, intuitive, and easy to use. The last time those three came together when iOS/Android hardware is concerned was… Actually, I’ll have to get back to you on that.

What Parrot’s AR Drone Does 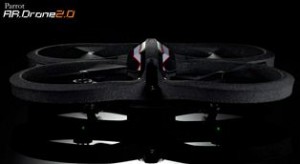 So, what all does this thing do? Well, for one, it flies. The Drone uses four helicopter-style rotors to fly and hover. It can be used both indoors and outdoors, and even features two hulls specific for indoor or outdoor flying. The indoor hull features a slightly smaller construction, and plastic pieces which protect each of the four rotors. The hulls are also both impressive and distinctive to look at.

Now, it must do more than just fly. Parrot would have a hard time finding takers if they were just selling a basic flying toy for such a hefty price tag. No, it’s not flying that is the big selling point here; it’s the cameras. The AR Drone features two cameras.

The first one is on the front and has an OK resolution of 640×480 (780p if you upgrade to the AR Drone 2.0), and the other is a lower resolution vertical camera that brags its 60 frames per second ability. While controlling the Drone, the user can watch either camera through the screen, and use the iPod’s gyroscope abilities to control the plane. This combination allows the user to feel like they are piloting the Drone from a cockpit. In fact, once they’ve gained enough experience flying the Drone, most people are able to safely fly the drone without even looking up from their screens.

One of the great things about the Drone, is that is doesn’t require anything to be plugged directly into your device. iPods and Android phones both control the Drone via a Wi-Fi signal. This allows for a decent range, though it is a bit small for much outdoor use. Also, the AR Drone allows the user to record video from either camera while flying. This feature has turned the Drone (especially the AR Drone 2.0) into a great, fairly inexpensive alternative able to capture aerial footage of various things. So far it has been used by everyone from journalists to independent film makers as a great money saving way to captures creative, steady aerial footage.

Getting Technical With The AR Drone

For even more technical users, the Drone can also be controlled via joystick and a Linux computer. Controlling the Drone this way allows for much more technical information, more precise movements, and even a dual camera view.

Another selling point of the AR Drone is its various augmented reality games. The compact flyer was originally featured with two games, a virtual combat game called “DRONE WAR” that allowed multiple Drones to duel it out in the air, and another single player venture called “ROBOT” where the player battles a virtual robot. Both of these games are great demonstrations of the Drones capabilities, but neither can really entertain a player for very long. 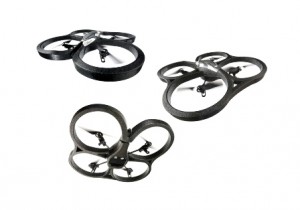 Luckily, Parrot released means for third party companies to create their own games for the Drone. Hopefully, someone takes up the opportunity to create a really entertaining game with this technology. It’s hard to call Parrot’s AR Drone anything but a success.

All of the technology works well, the games are fun for a while, and the video capture is fun and has several practical uses. Other than the hefty $250-300 price tag, there’s really no reason not to pick one of this sleek flying machines up today. If nothing else, you’ll just about always have at least half a dozen people asking you if they can try.

Click Here to Order a Parrot AR.Drone on Amazon

The cheapest place we found for a Parrot AR.Drone is Amazon. You can order one now and save $40!