Google’s mobile operating system, Android, has massively gained popularity all over the Internet, for the Tablet and Smartphone marketplace. Android is an open-source Linux based OS for mobile devices developed by the Open Handset Alliance led by Google. With over 200 million Android powered devices, Android is one of the best-selling smartphone platform worldwide after Apple’s iOS for the iPhone.

Google has released a number of updates since the original release of Android, fixing over thousands of bugs and adding new set of features. Every version released is codenamed, in alphabetical order, after a dessert. Some of the most recent updates include, Android 2.2 Froyo, Android 2.3 Gingerbread, Android 3.x.x Honeycomb, and the current release (4.0) named “Ice Cream Sandwich,” which was announced on October 19, 2011.

Android Ice Cream Sandwich was previewed at the May 2011 Google I/O event, and was officially launched at the Galaxy Nexus and Ice Cream Sandwich release event on October 19, 2011. It brought almost all of the feature of Honeycomb and also added new features including, facial recognition unlock, network data usage monitoring and control, unified social networking contacts, photography enhancements, offline email searching, app folders, and information sharing using NFC. Since Android is open-source, the source code for Android 4.0.1 was released on November 14, 2011.

Android 4.0, the Ice Cream Sandwich, marks the start of a new era for Google’s mobile platform. The release has brought in some of the biggest changes and new features since the launch of Froyo in 2010.

The most prominent change in the Android Ice Cream Sandwich is its new user interface, which is vibrant and has got the most common actions more visible and lets its users’ navigate through the phone with intuitive gestures. Some of the main features, or perhaps the new enhancements that the Ice Cream Sandwich has got is the new magazine style interface, swipe navigation, virtual button, high native resolution, and of course the common actions.

The Magazine Style Interface seems to be inspired for Windows Phone 7’s Metro UI, however, it certainly has some distinct features of its own and doesn’t really seem to be a complete “copy” of the Metro UI. On the other hand, the swipe gestures for navigation is quite easier. The most common actions are more visible throughout the OS in the top or bottom action bars. 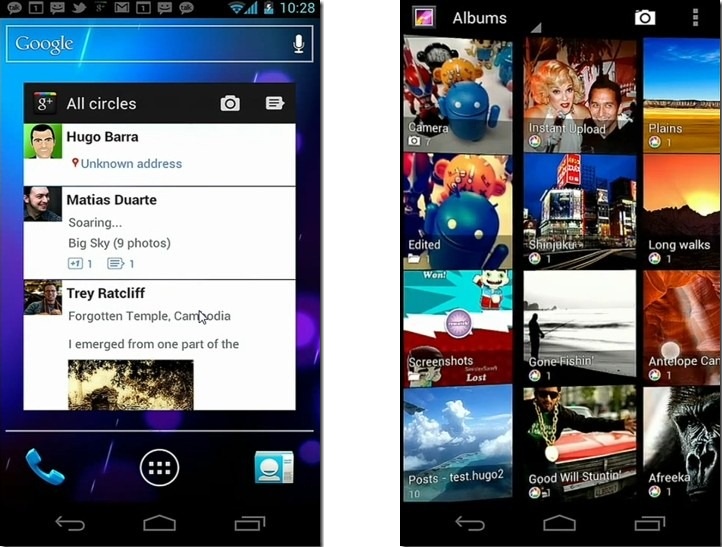 The hardware buttons have been replaced with virtual buttons called as the System bar that work across the entire UI. The bar includes Back, Home and Task Switching button. These buttons can be disabled in certain situation, like during an incoming call or on the lock screen. The home screen also has a transparent Google Search box with voice actions button. Apart from all these, the Android 4.0 Ice Cream Sandwich sports an incredible resolution of 720 x 1280 pixels, unlike its previous version that had a resolution of 480 x 800 pixels.

Overall, the user interface looks stunning and sports great new features, which are definitely useful throughout the OS.

Google has come with a new keyboard in the Android Ice Cream Sandwich, which it had promised earlier to keep updating the keyboard. Well, compared to its earlier version, the keyboard is pretty good and makes it lot more easier to type messages and other inputs.

The Messages feature in the Android Ice Cream Sandwich has a wider looking interface with bigger characters. The New Message icon is placed at the left-hand corner of the screen, making it ideal for both left as well as right-handed users. The OS offers real smart word predictions, which is pretty quick and accurate most of the times. Only three suggestions are shown at a time, making it easier to select the word you want to use. The built-in input technology auto-corrects misspelled words and underlines potentially wrong spellings, which is quite impressive for heavy messaging and e-mail users. 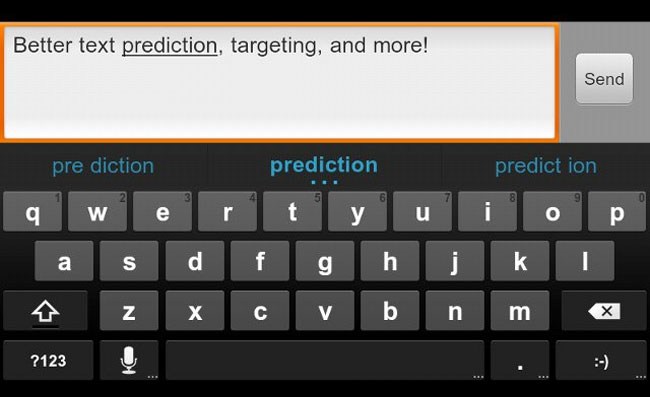 The speech to text feature has also been enhanced in the Ice Cream Sandwich, giving you real time feedback, with which you no longer have to wait until you have finished speaking to see what the phone has actually typed in.

Android Ice Cream Sandwich has a variety of new and improved built-in apps. Some of the apps include in the OS are:

The People app is the major change in the Ice Cream Sandwich. It offers richer profile information, including a large profile picture, phone numbers, addresses and accounts, status updates, events, and a new button for connecting to integrated social networks. It also includes a ‘Me’ profile that is basically your contact card which holds together all your contact information including, social media, instant messaging and web services profiles.

The Phone Dialer app has also received some improvements. You can access direct dial shortcuts to your favorite contacts in the same magazine style layout. When you receive a phone call or make a phone call, a large high-resolution image of the person you’re contacting is show on the screen. The app also automatically text messages to the caller if in case you’re busy and couldn’t answer the call. 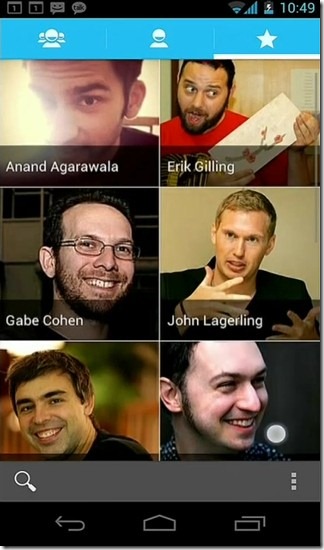 Your incoming messages, voice transcriptions, and audio files from one or more providers are integrated together in the phone app, as Visual Voicemail. You can easily playback voicemails right from the list and also manage the playback speed. Third-party applications can integrate with the Phone app to add your own voice messages, transcriptions, and more to the visual voicemail inbox.

The OS also comes with unified Calendar app that brings together personal, work, school, and social agendas. With user permission, other applications can contribute events to the calendar and manage reminders, for an integrated view across multiple calendar providers. Calendars are color-coded and you can swipe left or right to change dates and pinch to zoom in or out agendas.

The OS supports GTalk and Gmail app. Just like the Messages app, the GTalk app has a much cleaner interface with bigger avatar icons, showing six users at a time on the screen. The Gmail app on the other hand features several interface and functionality enhancements including the 2-line previews of all your emails. The Gmail app will also let you search offline messages dating back to 30 days.

Since the release of Android 2.2, Google had not updated the Browser app. However, the Ice Cream Sandwich features an improved browser, which is far better that the previous versions. It has a completely new and revamped UI, a Tab bar and now allows users to synchronize all their Google Chrome bookmarks. Perhaps the most significant feature is the ability to save pages for offline viewing.

The Browser app now supports over 16 tabs opened at a time and switching between tabs has been made simple, just like task switching. You will be displayed with a scrollable list of larger tab thumbnail previews and the ability to close the tabs by simply flicking them out off the list with a swipe gesture.

Android 4.0 offers an improved multi-tasking or switching between open apps with a long press on the home button. A list of active applications will be displayed with a small thumbnail of the window, similar to the feature in Honeycomb. Holding the dedicated button on the System bar brings you with this scrollable list of running application and allows you to easily switch between them with a single tap.

You can even close the running apps right from the task-switching interface by flicking them off the screen with a swipe gesture either to the left or to right. 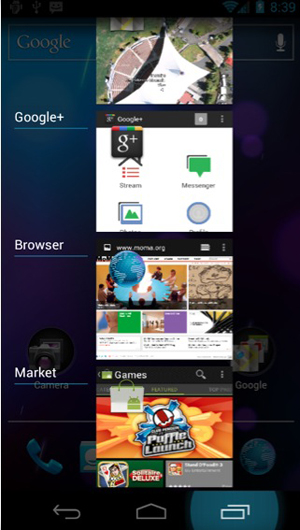 Notification on the other hand has a few tweaks and improvements. The OS has rich notifications system by providing with more information as well as control than just text. It includes rich and dynamic contents with images and control elements.

Dismissing notifications has been made a lot easier in the Ice Cream Sandwich. You can simply discard or dismiss notifications one by one by simply flicking them off the screen with a swipe gestures without effecting the other notifications.

The camera app has been effectively optimized visually, with more visibility on the screen and a large button on the side. It includes many new features that allow you to easily capture photos and videos. It has an in-built image-editing tool with which you can easily edit your captured photos and share them with your friends. 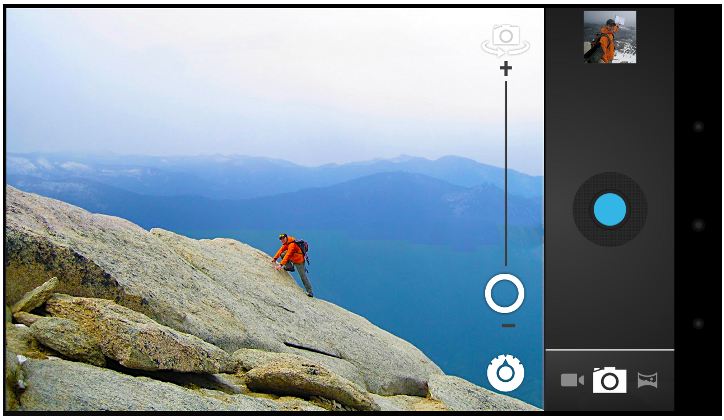 It also boasts a new sing-motion panorama mode, allowing you to capture panorama images by simply moving your camera slowing in horizontal direction. The app internally stitches the images together and within seconds, the complete panorama image will be displayed.

Sharing captured photos with friends has been made simple enough. Once you have taken a photo, you can share it with your friends through any installed supported services by simply selecting the service of your choice. It takes only two taps to share your photography to the world.

Ice Cream Sandwich supports full HD video recording at 1080p, though the feature is completely hardware dependent. The OS lets you launch the camera fright from the lock screen by dragging the unlock ring over to the camera icon.

The Android Ice Cream Sandwich now supports unlocking your Android device with the face recognition technology. Of course, the feature will be available on those smartphones that a front facing camera. The security option enables you to unlock your phone by holing it up to your face for few seconds and magically, if the phone thinks that it is actually you, then it will unlock the phone. However, if the match is inaccurate, then it gives the message – “Sorry, don’t recognize you.” You can also unlock the phone using your PIN if in case the Face Unlock feature fails to function for some reasons.

This is perhaps one of the most useful features in the Ice Cream Sandwich. The Data Usage app is a built-in feature, which provides you with detailed graphical information about the data usage of each app. It also shows you your projects data useful in the remaining days of the cycle. The app lets you zoom in on a particular time slots in the cycle. You can spot the app with the highest usage and set a limit or completely shut the background data access for that app. 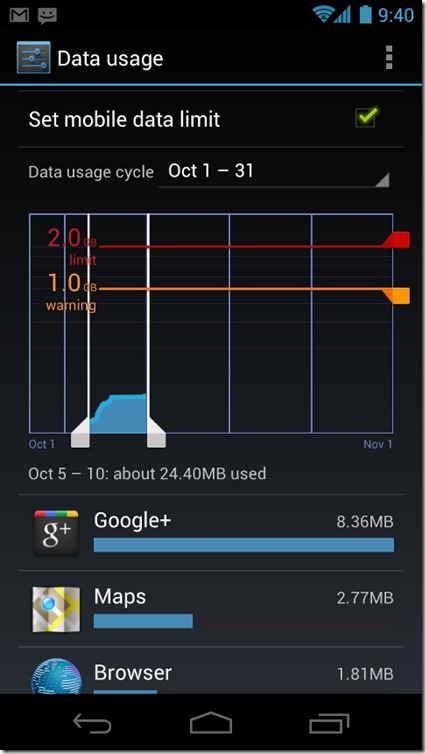 Android has always been an amazing, brilliant and a powerful platform. With the release of Ice Cream Sandwich, its power, features, usability, and security has reached new heights. Compared to Apple’s iOS and Microsoft’s Windows Phone 7, Ice Cream Sandwich is the most easiest to learn OS, and that’s definitely going to be a game changer and could possibly a key in the wars against the giants. What do you think of the new Android Ice Cream Sandwich? Do you find the features interesting and useful? Please let us know by adding your comments in the comments section below.