Google Gives Social Network Another Try With Google Plus

Something you have to admire about Google is the fact that they can be extremely persistent when they want to be. This is certainly the impression that I got when they recently announced their plans to roll out Google Plus; their latest attempt at social networking. Previously, Google had tried to enter the Social Networking scene through acquisition (Orkut), stealth (Buzz) and innovation (Wave). While, none of these brought success, they did teach Google some valuable lessons. This time, Google has dreamed big and put in a lot effort to realize that dream. 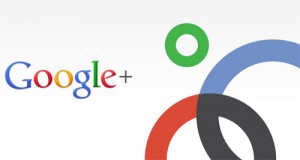 If I could describe Google Plus in one word, I might choose “intimate” because thatword seems to properly represent the philosophy behind this endeavour. To me it seems that Google has identified a fundamental reality of our average social experience: we are not the same person to everyone. Hence, it has built a system that can seamlessly allow us to customize the level of social interaction we want with different people.

There are some very impressive features that have gone into Google Plus that could really enhance the social experience. To give proper context to these features, I have compared them with Facebook. 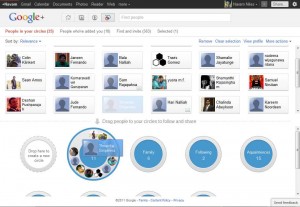 At first glance, Circles seem to be a simple method of categorizing your friends: putting relevant friends in relevant Circles. However, you can also post material and directly interact with members of a specific circle. This is great if you want to avoid mentioning the same thing to two very different groups of contacts.

For example, you could post academic material in a circle containing your study friends, while posting work material to a circle dedicated to your colleagues.

Facebook: First of all, adding friends to different friend categories only influences the chat feature. To my understanding, the best ways to customize your social experience on Facebook would be to create different groups and add relevant friends into it. Also, do not forget customizing privacy settings to allow/deny access to albums or other material. Tagging people in posts also helps.

The problem is that this is very cumbersome. Most of us are in at-least a dozen groups and sooner or later people lose interest in interacting within groups because the primary method of keeping tabs is through the news feeds. Even this feature is not the best because it does not do a good job filtering out the people I am less interested in (the only option is blocking them out, which is something people are hesitant to do). Also, blocking out some content could really offend some people. Tagging people does help, but that also draws everyone’s attention, not just the ones you tag.

The Verdict: Circles are just simple; add your friends to a circle and you are good to go. The privacy, the posts and the entire social interaction is automatically customised. In comparison, Facebook is more complex and even though it does deserve credit for simplifying the privacy settings, it is still very complicating and still requires a lot of micro management.

Google Plus: Hang out

This feature allows users to invite specific contacts or even entire Circles to a video conference. What I like about this is the fact that different participants can invite different people to the conference. The total capacity is actually 25.

Facebook: When I started writing this article, Facebook just announced that it would allow Skype video chats. However, judging by the initial feedback the video quality does not seem to be very good.

Verdict: In its current form, Facebook is structurally incapable of rolling out something similar to Hangout. It would require a completely new approach to the chat interface in general. Skype is wonderful as a standalone app, but efforts to integrate it into Facebook or other platforms will not provide satisfactory results overnight. Meanwhile, Google already has a lot of experience with audio and video services via Google Voice and its own Google Talk. 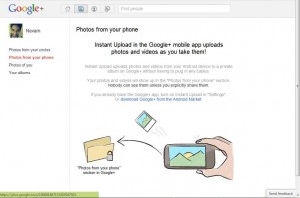 A lot of our pictures and videos are still lingering in our cameras and smartphones and some may never grace Facebook because we may simply be too lazy or too busy to upload them. Google’s instant upload solves this problem by automatically uploading all your pictures and videos to a private Google+ album. Later, you can decide on editing or posting it. Unfortunately, this is only available for Android phones right now.

Facebook: As far as I know, there is no comparable feature.

The Verdict: Google+ is the clear winner here. 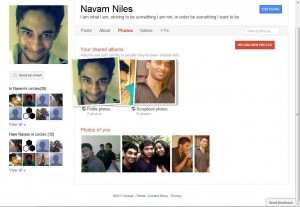 Adding and tagging pictures is very similar to Facebook. However, Google’s interface with regards to editing and commenting is somewhat different. Also, as mentioned earlier, you can post pictures directly to different Circles. This means you do not have to go through the added problem of customizing privacy settings and offending people in the process.

Facebook: The only option is to upload pictures to different groups. However, as I mentioned earlier, this is a very cumbersome process especially because people tend to interact very little on groups. Circles in comparison make the specific social interaction more flexible and meaningful.

The Verdict: Uploading and sharing pictures on Google+ is easier but the only real difference is because of Circles. There are added features but I am not giving it too much credit for this feature. 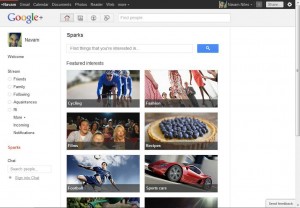 An exciting name for a rather bland feature. Sparks allows you to add your interests (eg. Technology, history, fashion, etc.) and allows you to share and comment on these sparks with your Circles or other friends.

Facebook: posting links on your profile or adding interests to your profile list is quite similar to sparks. There is no great difference here.

The Verdict: I suppose I saved the last for the least, even on Facebook, I doubt people pay a lot of attention to the “interests” on the profile page. However, the only difference with Google+ is that you can post directly to your Circles, which might make the experience better but by itself, it is not much.

This allows group chats across different platforms such as mobile (also currently restricted to Android) and PC. Users can initiate chats directly with specific Circles or friends. There are 3rd party apps that allow this sort of flexibility but as far as I know, this is the first time it has been fully integrated into a single social networking system.

Facebook: The chat interface has improved and now you can initiate group chats.  One thing I personally dislike is that Facebook displays chat histories and messages together. This really makes it difficult for me to keep track of anything properly.

The Verdict: Google’s chat interface is very simple and hopefully it will probably incorporate the experience it has gained through Gmail Chat. If it does, we are looking at a much better chatting experience. Chat histories are saved into the “chats” on the Gmail page.

What do you guys think?

I know I have not gone into the nuts and bolts of some of these features but I hope this gives people a good understanding of what Google Plus is all about.

If there were anything you guys would like to contribute, please let me know. Also, I am interested to know how many of you are willing to switch over from Facebook and if so, why?

Once you are done, go over to Part 2: Google Plus to see where exactly Google Plus fits in Google’s overall strategy, and what exactly are its rivals going to do about it.