We’re always on the lookout for the next grandiose title in mobile gaming. Sometimes one blatantly smacks you right in the face, and other times you have to go searching. In the case of our next game, we had to do a little searching, but alas we have prevailed, and we’ve found another excellent mobile game to play in your downtime.

One genre that is kind of lacking, as far as mobile games are concerned, is the 2D shooter genre. There are plenty of third person games, first person shooters and puzzle titles on mobile platforms, but there genuinely aren’t that many 2D shooters. We’re talking about traditional 2D shooters like Galaga or Asteroids, that are also worth playing.

There is no doubt about the fact that Sector Strike is a fantastic addition to the 2D shooter genre as a whole, even when you consider that it has been developed for mobile devices. Even though the game is already top notch, it will be amusing to see how fleshed out it eventually becomes with updates. It’s truly all uphill from here for the features in Sector Strike!

Sector Strike is a classic 2D shooter like Super R-Type, or Tyrian. While playing you’ll obviously be blasting away enemies with a custom fitted spaceship and simultaneously dodging enemy gunfire. 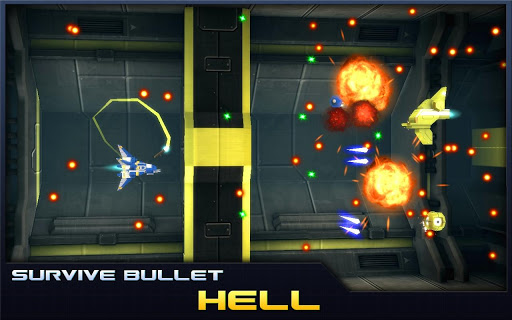 As you’d expect from a 2D bullet hell shooter in space, you can improve your ship with over 20 different weapons and unique abilities.

The weapons include a phase cannon, thermal torpedoes, a beam cannon, an orbiting orb system, a tractor beam, and a consumables option. Each weapon tier has a minimum of three upgrade types, with a maximum of four types (on select weapons). Each upgrade type can be increased several times, and there are varying levels available for each upgrade. Upgrades cost both credits and energy, which can be collected in the game by defeating enemies. On average, you have to complete about three or four levels in order to raise enough resources to purchase an upgrade. Once you start buying the higher tiered upgrades though, it takes a little longer.

While playing, you can also collect instant powerups, which provide a bonus weapon to your ship. After collecting three powerups, and thus obtaining three weapon upgrades, the powerups just add more funds. When you are struck by an enemy shot, or when you collide with an enemy ship, you lose your weapon powerups and have to start over. It’s necessary to state that these instant powerups are entirely separate from upgrades you purchase between levels; once purchased you never lose those upgrades. 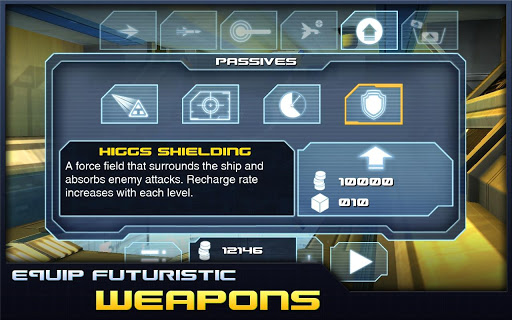 The controls have been designed specifically for use on touchscreen devices. By default, the player ship fires automatically, so you only have to worry about moving the ship around the screen by sliding your finger along the scene. A menu button across the top of the screen controls the automatic fire for each weapon type individually. So, for example, if you wanted to fire your basic cannon continuously but also cease the thermal torpedoes, you can do so- although, we’re not quite sure why you would.

The graphics are solid for a mobile game, and the game itself operates smooth as butter (provided you have an appropriate device). We played the game on a Motorola Droid Bionic, outfitted with the new ICS update.

It’s also worth noting that the soundtrack is quite remarkable for a mobile game, and has been composed entirely by Boneyard Audio.

Sector Strike is Free to Play

As you may have already noticed from the trailer above, Sector Strike is free to play. It does feature in-app purchases though, which means you can advance further in the game, and get new content, with real money. 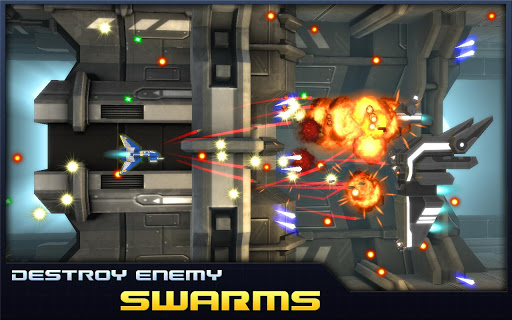 Unlike most freemium games, Sector Strike does not require you to buy upgrades and game content to progress. You can earn pretty much everything available for purchase in the real money store, by playing the game for an extended period of time. Currently, the only things you can buy with real money are credits and energy, which is used to upgrade weapons. Though, we wouldn’t doubt that Clapfoot Inc may take advantage of the in-app market in the future and offer more for goods like custom ship skins and the like.

As it stands, Sector Strike is an excellent game, and certainly provides an entertaining way to pass some time while you’re sitting around waiting for that oil change. Don’t be discouraged by the idea of in-app purchases, they have little effect on the gameplay as a whole, and they’re just there as a bonus.

If you trust our assurance that the game is pretty fun, you can find Sector Strike on Google Play. If you happen to disagree, please feel free to send us a shout out in the comments below (keep it tasteful, of course)!