It’s been a long wait; but was it worth it? Finally the TM franchise hits Sony’s PlayStation 3 platform and have they done anything to the game in the intervening years? Did the boys at Eat Sleep Play do anything to justify the loudly trumpeted arrival on Sony PS3 or is this just a marketing wheeze? Sony played all cards very close to their chest on this one. Was that hype or because they weren’t sure about product? Makes you wonder! Forget what you thought you knew about Twisted Metal. This is a whole new world – literally.

Meet The Twisted Metal Gang – If You Really Want To

Meet Calypso and his world of bizarre anarchy where he has the power over time and space to offer the twisted souls who are our game play companions respite from their torment if they are victorious. So what of our companions?

Bring on Sweet Tooth – a clown with a darker side. Always a black angle that one and this clown don’t disappoint. Having murdered his wife and family (strangely, apart from his daughter), all because he could, mild mannered Marcus Kane mutates into our much beloved Sweet Tooth. He’s a crazed killer clown who drives an ice cream van. He controls the gang known as the Clowns and he’s now looking to track down his daughter. Presumably he’s not looking to kiss and make up?

Up next comes Mr Grimm a stuntman with a past. Driven to distraction Mr Grimm spent his life anguishing about the loss of his Father, also a stuntman, in an accident. How careless was that Mr Grimm Snr.! Our stuntman enters the game hoping to win the chance to go back in time and stop his Father being killed and boy is there a surprise in store for him if he does. 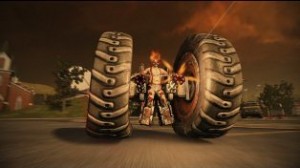 Finally there’s the parody that is Dollface. Dollface is Krista Sparks, a supermodel whose face was scarred in an accident. Her quack told her to wear a mask after surgery but disappeared before he could remove it and complete the treatment. Well, that’s got to be enough to send any supermodel over the edge of the catwalk. In her madness she is driven to destroy every other model she comes across as a way of dealing with disfigurement of her own. Now, I ask you, as if… She needs to win the competition so that Calypso can send her back in time to avoid her accident and become the most famous model of all time. Don’t underestimate this doll, there’s more to her than Barbie on steroids, by a long way.

At the end of the game you get to meet the Preacher, Sweet Tooth’s Son and a metamorphosed Sophie (who?) all sitting down planning out the plot for Twisted Metal 5. OK so I made that last bit up but I do wonder why they introduce new characters at the end like this.

In some ways the team seem to be trying to make it all hang together like a Hollywood blockbuster but parts of this story line would never get Oscar nominated. The plot is a bit thin – who is this Calypso guy? What’s he all about? Why does the Preacher crop up at the last minute? I know – it’s all about TM5 but come on guys – can’t you make the plot a bit more credible? If not, drop the plot and the story and go back to being a great shoot ’em up – which this is.

With a whole new universe the designers have been able to let rip and backgrounds and vehicles really do look great but this is a fundamentally different Twisted Metal to its predecessors. Previous outings have focused on the relationship between you, you your car and a racetrack – all great stuff if a little static for 2012. Sure you can still get that with the new outing but the real difference is the dimension. Series originator David Jaffey has been heard saying how proud they are of what they’ve achieved in the multiplayer level but single combat fans will still have plenty to look forward to.

Jaffey has been doing the rounds to trumpet the new multi-player dimension in TM PS3 but has stressed that fans of single play mode won’t be disappointed either as it’s very strong. With a great choice of vehicles, singletons choose a team of three and during the course of the shoot out can switch between them sending no longer needed cars back to the garage for repair until they are needed again. So, choice is what it’s all about and making the right choices is the key to getting to the end of the marathon in one piece.

But, all said and done it is the multiplayer mode that makes this worth shelling out for. What designers Eat Sleep Play were looking to create was a clan system to keep players across the world involved in tight teams and it’s fair to say they’ve done a good job. 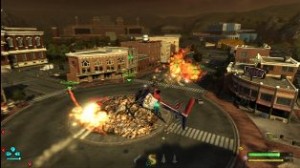 Plug into the Sony PlayStation Network and team up with a further 15 other players to pick a team of three vehicles to pitch yourself against all that Calypso has to offer. You and your whole crew can switch play as a team or compete against other teams in matches here as you work your way through a complex story that infolds, twists and turns across the world. The story, such as it is, is fast paced, well laid out and it all moves along to a brash soundtrack from artists including Larry LaLonde, Dan Monti, Rob Zombie and Iggy Pop and has great music. This will keep even the most unlikely member closely tied into your crew.

The cheapest place we found to purchase Twisted Metal is Amazon. You can get it for as low as $49.19 (new). Click here

to order it now…