The mobile gaming industry is booming; last year alone (2010) it made an estimated $800 million. People are buying games and applications on every available device including iOS devices, smartphones, tablet PCs and more. It’s come to the point where the mobile gaming industry is actually pulling players and revenue from the traditional gaming market.

Several name brand companies have already been participating in the growth of the gaming market including Sony, Apple, Microsoft, and more.

Sony, for example, is taking advantage of the mobile gaming industry through several mobile devices which are set to launch soon. The Xperia Play (Playstation Phone) is set to release sometime this month (April) or early May and the NGP or Next Gen Portable will release sometime late 2011 or early 2012. 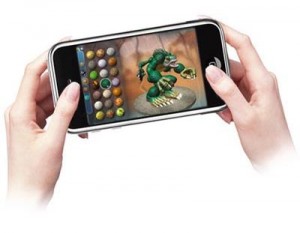 Apple also jumped into the mobile gaming industry with the release of their iPhone (4), iPod touch and iPad devices all equipped with an integrated A4 graphics and processing chip that is quite powerful. They are planning to up the ante with the release of the iPhone 5 and latest iOS devices which will be upgraded with an A5 dual core processor chip.

Microsoft recently entered the mobile gaming industry with the release of their Windows Phone 7 that connects to the standard Xbox Live network (XBOX 360 console) and offers several competitive mobile game titles. They have also been considering the idea of releasing a portable gaming console device modeled after their Xbox 360 console.

But Enough About Developers, What About The Audience?

The mobile gaming community doesn’t just consist of a younger audience, it’s actually quite widespread across all ages. 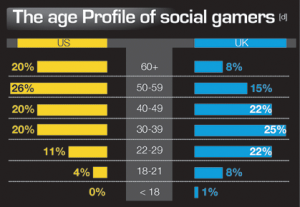 As you can see from the related image social gaming is spread between audiences of all ages, and is most commonly used by adults ages 50-59 in the United States, with adults ages 30-49 right behind.

It’s obvious that social gaming directly correlates to the mobile gaming industry and isn’t just something a lot of kids and teenagers are into; everyone is!

Thanks to the modern lifestyle it’s not always possible to sit down in the living room and enjoy time in front of a large television [and gaming console]. Instead gamers are turning to their mobile device to play in their free time (some even during their work time) on devices that they carry around constantly.

Because mobile devices are so easily accessible and are always available, they make one of the best gaming devices period. You can’t always carry around an Xbox 360 or PS3 console, but we’d be willing to bet you always have a mobile device handy ( such as a smartphone, mobile phone, electronic gadget, or tablet). This can most likely be attributed to why everyone is into mobile gaming.

It’s readily accessible, and in a lot of cases it’s free!

Did They Just Say Free?

Most developers are actually so successful because of the low cost pattern of designing mobile apps and games. Because it doesn’t cost much (when compared to traditional development) smaller independent companies are achieving what usually takes large teams of a dozen developers to accomplish. 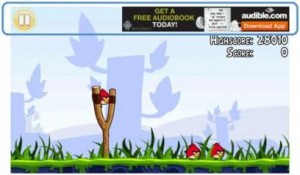 Mobile apps and games can be sold at a low cost to consumers because they are so inexpensive to develop thus ultimately increasing sales.

Seriously, think about it from a personal perspective. Let’s say you hear from a ton of friends or your favorite social media blog that a mobile game is amazing and worth your money; and then come to find it’s only $.99-$1.99. With such a low price tag what’s stopping you from buying it right away just to try it?

Absolutely nothing. Because even the most expensive games run for approx. $10 and in this day in age the cheaper the better.

Developers also offer completely free games and apps through the use of in app advertising. Free or not, they still make money from the advertising strategically placed within their game or application.

This marketing strategy also works because even though the application or game is free, consumers are forced to view advertisements in order to play. They deal with the advertisements because they love the game, and thus are subjected to potential marketing techniques which may or may not result in a purchase.

In the case of free mobile gaming, most developers make their money (obviously) through the advertisements they sell. A lot of mobile developers even restrict their free apps for use with internet access (requires an active internet connection) which allows for a completely active advertisement platform that can be altered at any time. This makes it easier for new advertisers to create content, and old advertisers to retire their content.

From a marketing standpoint this roughly translates to a completely inexpensive advertisement platform that is visible everywhere and anywhere twenty four hours a day.

And How About Some More Stats…

One odd statistic shows that most mobile gaming is not done out in public or on-the-go. EA Mobile’s VP of Worldwide Studios Travis Boatman revealed that most “mobile” gaming was in fact done at home. At the DICE 2011 Summit event Boatman talked about [and subsequently debunked] several mobile gaming industry myths; and flaunted the related statistics to prove he knew what he was talking about. 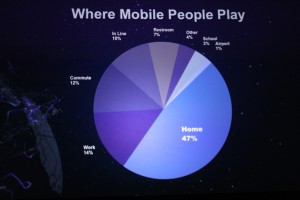 According to Boatman’s lovely pie chart (on the left) 47% of mobile gaming is done at home with the ideal runner up location being a work or office related environment at a 14% total gaming population rate.

This is very disconcerting news for console game developers and gaming console manufacturers. As more and more folks turn to their mobile devices to meet gaming needs, less dependency is required of home entertainment and gaming consoles.

What Do These Mobile Gaming Industry Numbers Mean??!!!

Some of you developers and marketers may be wondering, “just what exactly do these numbers mean?”

The answer is quite simple really. If you are not developing mobile applications and mobile games you are missing out on a substantial revenue gain; especially if you’re a game developer or work in the gaming industry.

It’s time to take mobile gaming seriously. As more and more mobile devices hit the consumer market mobile gaming use will increase not just across the country, but around the globe. Add in the fact that mobile device technology is advancing faster than any other computer based technology out there, and you’ve got a surefire winner on your hands.

Mobile Gaming Industry On The Rise!

Thanks to Gamespot and the Infographics Showcase for the mobile gaming industry statistics and visuals.