Samsung finally unveiled the all new Galaxy S3, the highly-awaited Android smartphone and a successor to the popular Galaxy S2, earlier this week in London. The Galaxy S3 is packed with great new features, including the ability to charge wirelessly, and has already created a huge hype around the Web describing the new phone as the “best smartphone of the year”.

Samsung, the South Korean technology giant, overtook the Finnish company Nokia as the world’s biggest cell phone maker earlier this year. They announced that the new Galaxy S3 Android smartphone would go on sale in selected markets by the end of May and rest of the world from the beginning of June.

It is also said that Samsung is expected to drive massive marketing campaigns and strategies to increase the sales of the phone. The Galaxy S3 is the official smartphone of the London 2012 Olympics, and Samsung expects to sell a good number of units at the time of the event.

The Galaxy S3 is big, it’s bold, and it could be the year’s best-selling smartphone. However, one of Samsung Galaxy’s biggest rival is the Apple iPhone 4S, which has sold over 35 million units worldwide in the first quarter of 2012. It’s war of the titan again – Samsung vs. Apple, but the big question is which of the two devices are better in terms of performance, features, and user-interface? To find an answer to this, we decided to set the Galaxy S3 up against the Apple iPhone 4S, exploring the differences.

Samsung’s Galaxy S3 has a huge display screen, and holding it up next to the iPhone 4S, gives a good vision of a father and son standing next to each other. Perhaps the Galaxy S3 has one of the largest touchscreens, although it is slightly smaller than the Galaxy Note. It has a 4.8-inch Super AMOLED HD with a 1280×720 pixel resolution and a pixel density of 306ppi. The screen is also reinforced with Corning Gorilla Glass.

The iPhone 4S features the famous Retina display technology by Apple. It sports a 3.5-inch IPS LED-backlit LCD touchscreen with a 960×640 pixel resolution and a pixel density of 330 pixels-per-inch (ppi). It also includes Corning Gorilla Glass just like the Galaxy S3, and an oleo phobic coating to prevent fingerprints on the screen. 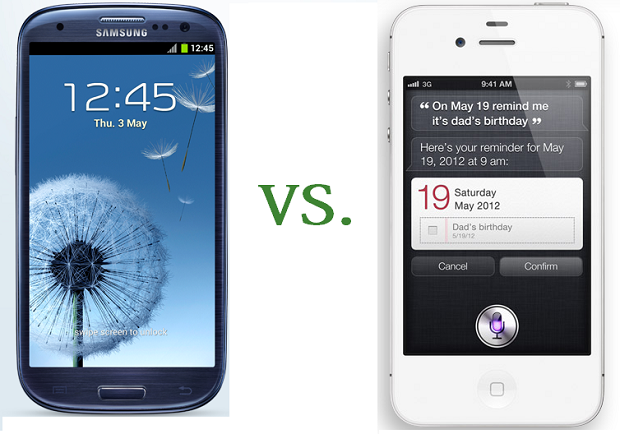 You can see that the width of the Galaxy S3 is way too wider and the thickness (depth) of comparatively lesser than the iPhone 4S. Apple should understand that big screens are what people want.

Samsung introduced a whole new quad-core 1.4Ghz processor called the Exynos 4 Quad in the Galaxy S3, while the iPhone 4S has the dual-core Apple A5. Despite the iPhone boasting a powerful 1GHz dual-chore chip, it now looks the poor relation when compared with others.

The Samsung’s multitasking performance is demonstrated by a feature called Pop Up Play that enables you to carry on doing tasks in a corner of the screen while watching a video at the same time.

The iPhone 4S’s camera is one of the best camera available when compared to any other smartphone. The Galaxy S3’s camera may not appear as better than the iPhone 4S, but the various features that it sports certainly makes it look slightly good. The Galaxy S3 has a Burst Shot feature with which the phone captures images at a rate of 3.3/second and then chooses the best picture of a set for you.

Another impressive feature is the Zero Shutter lag feature with which you can capture quick photos. It also has a feature with the ability to identify people within your photos and easily send them a copy of the captured snap. The Galaxy S3 has an 8 MP rear camera and an 1.9 MP front facing camera, while the iPhone has the same 8 MP rear camera, but 0.3 MP front facing camera. Both the phones have a capability of recording videos of resolution 1080p at 30 fps.

The iPhone 4S on the other hand, has features of its own, and you can read about them here.

Both of the smartphones have A-GPS, 802.11n Wi-Fi, HSDPA, HSUPA and Bluetooth 4.0, including accelerometers, proximity sensors, gyroscope and a compass. They both also have a 3.5mm audio jack. The Galaxy S3 handsets features a microUSB port, while the iPhone 4S has the familiar dock connector.

HDMI output is supported on both the phone – Galaxy S3 supports it via microUSB port, while the iPhone 4S supports it via its 32-pin Dock connector (via adaptors). Wireless streaming on the iPhone 4S is supported by Apple’s own AirPlay, including 720p AirPlay Mirroring to Apple TV. The Galaxy S3 on the other hand, has DLNA complaint for wireless streaming.

Here’s the comparison of the two smartphones:

Before we wrap-up the comparison post of Galaxy S3 with the iPhone 4S, we’d like to make a comparison with the phone’s predecessor – Galaxy S2.

Here are the official specs and feature comparison of Galaxy S3 and Galaxy S2 smartphones.

New Features in the Galaxy S3:

Samsung has introduced several new features in the Galaxy S3 and has also set a new standard for other smartphone manufactures to attempt to beat them. Some of the features include:

The Samsung Galaxy S3 is a great phone and has beat the iPhone 4S in many areas. By looking at the above new features and also taking into consideration the huge screen, the Galaxy S3 is stands out and perhaps has a good chance to beat the iPhone. However, this competition comes to no end, while Apple is yet to release the iPhone 5, which we hope to see in the near future.

So, what do you think of the new Samsung Galaxy S3? Do you feel that it is better than the Apple iPhone 4S, or stick with the Galaxy S2? Let us know by posting your comments below.