Recently, Google and Apple decided to take their competition to new heights with the unveiling of Apple’s iCloud. Cloud computing promises to be an intangible force that will help hold together our digital lives across an increasingly diverse array of electronic devices.

Interestingly, very few people seem to have a firm grasp of this concept and I think this is probably because of the impersonal nature of the “cloud”; everyone knows it is there but very few know what it exactly is.  A good example of this is a recent survey of one thousand US adults conducted by Ipsos OTX MediaCT, which revealed that most people are confused about cloud-based services. For example, when the respondents were asked if they used cloud based email, only 22% responded affirmatively.  However, when asked about the use of branded cloud services (e.g: Google, Yahoo, etc.), without referring to the term “cloud” almost 9 out of 10 answered positively.

The reality is that every time you use your email, share pictures or manage financial data, you are using some form of cloud-based service. The only reason this concept is receiving more exposure now is because of the huge proliferation of electronic devices. Without cloud computing it would be frustratingly difficult to store and access data from multiple devices. Therefore, cloud based services are going to become a more visible part of our lives; slowly but surely. 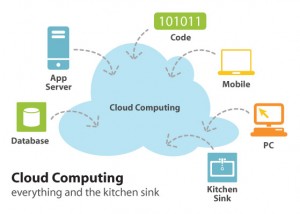 Basically, cloud computing can be divided into three broad categories: Software-as-a-Service (SaaS), Platform-as-a-Service (PaaS) and Infrastructure-as-a-Service (IaaS). What all three types have in common is the fact that it can be sold on demand; users can decide on the level of service they require, and the provider manages the service.

Let us start with IaaS, a good example of which is Amazon’s Web Services (AWS). This provides firms with access and control over virtual servers and storage. PaaS, on the other hand, refers to a collection of software and product development tools that are maintained by the provider. Examples of PaaS include GoogleApps and Microsoft Azure. SaaS is the most interesting model, because usually the provider supplies both the hardware and the software requirements. Salesforce.com is a wonderful example of SaaS. The latest entry into this category is Apple’s iCloud. Now the iCloud is technically a SaaS model but given Apple’s strategic aims, this model might soon evolve into a hybrid form by including features from the other models.

Cloud Computing is heating up because technology is forcing firms to adopt strategies that are ever more aggressive. As a result, firms are being forced to compete in areas that were tacitly considered out of bounds (Google Vs Apple for example). The same is true for cloud computing.

GoogleApps, for example has been focusing on ousting Microsoft’s dominance in office software. Meanwhile, Apple’s relatively late entry with the iCloud, is not only aimed at consolidating its strength over all iOS devices also to make headway into digital entertainment and office use. Google and Apple are not competing directly because they are perusing two different strategies with regards to cloud computing (and let’s not forget their corporate attitude). While Google’s model is aimed at “pulling” data, Apple seeks to “push” data.

However, both models seem to be evolving in to a multi-dimensional character and we can only guess what these tech giants along with the rest of the “Gang of Four” (Amazon and Facebook) are planning.

Are We Ready For The Next Generation of Cloud Computing?

This is a question that has been on my mind for a long time now. As I have described above, cloud computing is going to become more visible in our everyday lives as we zoom around with our smart phones, tablet PCs, Laptops, etc. Yet, I wonder how people will actually react to all of this, especially because the vast majority is hopelessly confused about the concept and tech firms are nervous about discussing it in detail. One of the main concerns is privacy. If we fret about Google’s Street View or Apple’s GPS, while simultaneously wanting more seamless access to our data across multiple devices, how can we honestly embrace cloud computing? The problem is that by not talking about all this in an open and honest manner (I’m specifically referring to the “gang of four), it’s just a matter of time before we wake up to an overblown crisis concerning cloud computing. This technology can be hugely beneficial but by ignoring certain uncomfortable details, we may end up damaging its potential.