Google and Samsung have come together to create one of the most exciting Android devices of the year: the Galaxy Nexus, which is the third generation successor to Google’s Nexus One and Nexus S. The smartphone

The Samsung Galaxy Nexus comes loaded with some very impressive hardware and more importantly, the latest Android OS. However, be warned, it also has its fair share of drawbacks. 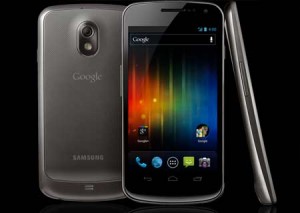 The Galaxy Nexus packs in some very impressive hardware and the crown jewel is arguably the 720×1280 pixel resolution 4.65″ Super AMOLED HD screen. The screen features a 316ppi pixel density, which is less dense than the iPhone 4S’s 329ppi but it is still the finest in the market right now on account of the enhanced resolution.

It is not just the display that is designed to amaze, the Galaxy Nexus also comes with a dual-core 1.2Ghz TI OMAP 4460 processor and 1GB RAM. While users can opt for either the 16GB or 32GB variant it is somewhat disappointing to note that the Samsung Galaxy Nexus does not feature external memory capability. Something that is welcome, however, is the inclusion of the NFC chip. This technology is yet to mature in the U.S. but as retailers around the world begin to experiment and deploy the technology in larger numbers, there is no doubt that it has a lot of potential. 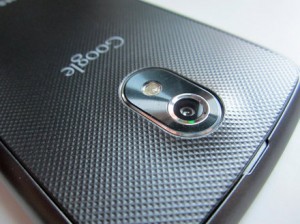 The Samsung Galaxy Nexus comes with a not-so-spectacular 5 megapixel primary camera with one LED flash. The secondary camera (front facing) features a decent 1.3 megapixel. This obviously does not mean that the camera is disappointing. However, given the level of competition that is coming out with comparative devices, a more powerful camera would have been much appreciated.

Obviously, the Galaxy Nexus also features the now-standard sensors including an accelerometer, ambient light sensor, barometer, compass, gyroscope and proximity sensor. This combination of sensors is definitely put to good use through a variety of amazing features and apps that have now come to redefine the Android experience.

Compared to the Galaxy S2, the Galaxy Nexus is a relatively larger at 135.5 x 67.9 x 8.9mm. Weighing 135g, it is also slightly heavier than the Galaxy S2, which only weighs 116g. However, it does not feel nearly as heavy as it looks. In fact, given its size, it actually feels rather light and comfortable. You will also notice that it is slightly curved but far less so than the Nexus S. 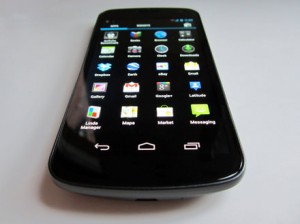 The front of the Samsung Galaxy Nexus looks very clean and futuristic owing to the fact that it does not feature any buttons at all. Instead, the only things you will see is the screen, the brightness sensor and the front-facing camera. On the right, you will find the power/standby and on the opposite side, you get the volume control. The bottom features the 3.5 mm headphone jack and the micro USB port. There is nothing on top, which in my opinion, is a very positive design feature because this means that when the phone is in your trouser pocket, you run a smaller risk of pulling out the headphones or pressing the power/standby button in the process of trying to answer a call or read a message (something that happens all too often with my Wildfire S). The removable back cover of the Galaxy Nexus feels very delicate, so much so that it might give you the impression that it could snap while you are removing it but according to Samsung, it is far stronger than I dare test.

Before moving to the interface, a special mention should be made regarding the LED notification light which can be found on the bottom of the display. The light itself is subtly tucked away and will display different colors depending on the notifications.

The crown jewel of the Galaxy Nexus is of course the Android 4.0 Ice Cream Sandwich (ICS). This is arguably Google’s most ambitious attempt and it will deliver a unified UI for smartphones and tablets.

You may not find yourself familiar with most of the features as soon as you reach the home screen and that is because virtually every element has been beautifully redesigned. However, it must be noted that since ICS is still relatively new, there are only a limited amount of customization features (e.g. home screens) available right now but that is certainly set to change. 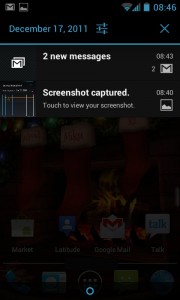 The first thing you will notice is the enhanced notifications system. You can quickly access your messages through the lock screen (if there is no additional layer of security) and even swipe away individual notifications. 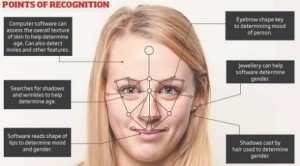 One of the most important changes packed into ICS include the new lock mechanism. Users will only have to swipe the lock icon left to get to the phone and right to access the camera. However, this feature will not work if you use an additional layer of security (e.g. pin, password, face lock or pattern lock). Speaking of security, the new Face Lock function is both fun and foolproof. If you are not so sure about it, then you could always opt for the standard mechanisms. 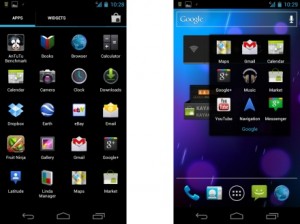 The app drawer utilizes a grid system that lets you quickly access all your apps and widgets. The makes it far more easier to quickly customize your settings and is certainly a step up from previous Android versions. You can also group the apps into different categories in a manner that is quite similar to iOS. 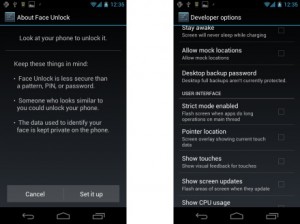 Another welcome addition is the ability to customize the data usage and notifications based on each particular app. Thus, users can set data limits, data warnings and monitor data activity without much of a hassle. You will realize the benefit of this if you are prone to using data intensive apps and services. 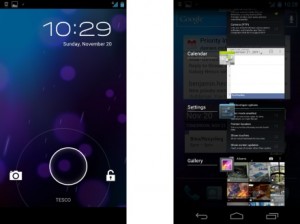 Last but not least, you will love the approach taken by ICS regarding multi-tasking. There is not a persistent multitask button in the virtual menu. The system allows you to see what apps you were previously using with an accompanying snapshot of that screen. You can also close the apps that you are not using.

The Galaxy Nexus comes with the standard, Bluetooth, HSPDA, Wi-Fi and GPS. If you are looking for super fast speeds when browsing the Internet, then the Galaxy Nexus is definitely not going to disappoint you. Reception on the HSPA+ version and the LTE version are amazing but naturally, the latter is a better bet. 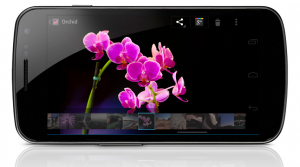 As mentioned earlier, the fact that the Galaxy Nexus only features a 5 megapixel camera does not necessary mean that it is a bad camera. It can certainly take some wonderful pictures and it comes loaded with a very quick auto focus, superb face detection and an excellent set of photo editing tools. The best feature is the zero shutter-lag but you might take awhile to get used to it. When taking pictures, the camera works best in daylight conditions but the quality significantly decreases in low light settings.

For standard use, the battery packed into the Samsung Galaxy Nexus is just fine (looking at the HSPA+ version). You can easily get around 20 hours with a single charge despite heavy use. However, if you plan to use power-hungry entertainment apps then you might have to recharge the phone sooner.

The Samsung Galaxy Nexus, despite its relatively minor flaws is arguably one of the best smartphones ever made, thanks to the combination of the superb ICS, gorgeous display and powerful hardware. It is certainly faster, cleaner and more elegant than any Android smartphone before it. That said, there are some features that might deter people from snapping it up right away. There is still a lingering thought that it could have been much better than it is. Yet, whatever the concerns, the fact is that the Galaxy Nexus has succeeded in fusing an amazing OS with powerful combination of hardware to go with it.

The cheapest place we found to purchase the Galaxy Nexus is Amazon. You can purchase the unlocked version (16GB)