Say goodbye to the old style messy desktop PC’s. Google and Samsung together have taken a huge step in expanding the Chrome OS family of devices by launching a mini Chrome OS-based desktop PC – Chromebox. The mini-PC is capable of running the web-centric Google Chrome OS, powered by Intel’s Core processor.

The Chromebox features the same features of the web-centric Chromebooks, however, the Chromebox has an ultra-compact desktop configuration – that is, you will need to provide your own mouse, keyboard, and monitor.

The idea and sense behind Google’s Chrome OS is quite straightforward. On an average, it is know that most PC users spend most of their time on the Internet. Thus, Chrome OS is basically nothing but an OS that is always connected to the Web. Chrome OS is the first cloud based OS, which was released back in May 2011. 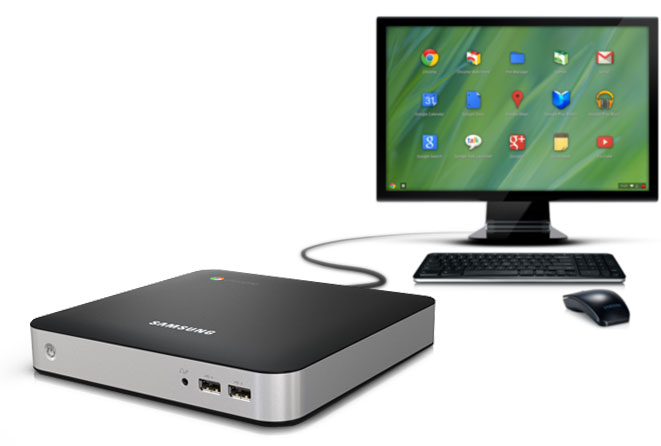 Chromebox is an addition to the Chrome OS family. It is fast, well designed, offers same features as the Chromebook. Officially called as the Samsung Chromebox Series 3, is roughly the size and shape of an Apple Mac Mini.

Like the Series 5 Chromebook, the mini Chrome OS PC has an Intel Celeron dual-core processor with the support of 4GB RAM. It comes with a wireless-N, Gigabit Ethernet, Bluetooth 3.0, DVI, and six USB 2.0 ports along with two DisplayPort++ outputs. The DisplayPorts are also compatible with HDMI, DVI, and VGA. It can be connected to up to two 30-inch displays simultaneously.

The Chromebox is available for a price tag $329 (this is without the keyboard and mouse).

Both the Chromebook and the all new Chromebox will be available for online purchase in the U.S. and the U.K. It is said that the products will go on sale in brick-and-mortar stores for the very first time in Best Buy locations next month.