It is with pure delight that I can announce, the Motorola Droid Bionic Ice Cream Sandwich update is finally here! Speaking as a current Droid Bionic owner, it’s about damn time.

I purchased the Droid Bionic back in November of last year, when it was released. At the time of release, it was running Android 2.3 Gingerbread, and Motorola then promised to update the phone to ICS as soon as possible. Unfortunately, the Droid Bionic lost its position as a flagship Android device thanks to a lengthy and especially hampered development process.

The Droid Bionic was originally supposed to launch in Q1 2011. Instead, it was delayed, and Motorola grew relatively quiet about the actual release date of the phone. In fact, Motorola has gotten quite adept at keeping quiet in regards to anything consumer related. The ICS update, for example, was supposed to release sometime in Q3 2012. Motorola remained quiet the whole time they were working on the update, until finally at the end of Q3, when they updated their ICS update status page to list “early Q4” for the Bionic ICS update. Needless to say, this pissed off a lot of Bionic owners because they were kept in the dark for so long. 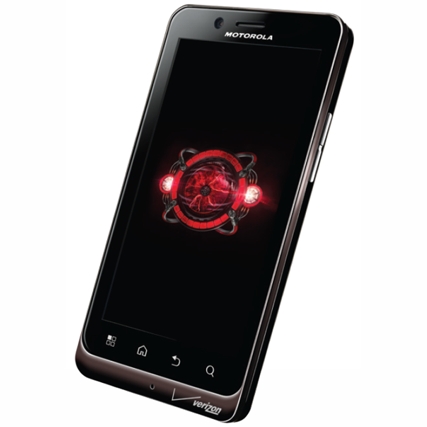 A little over a month after the Bionic release, the phone was quickly overshadowed by the new DROID RAZR line, which happened to feature superior performance, much better battery life and a slimmer body style. Basically, for those loyal folks who had been waiting patiently, a long time, for the release of the Droid Bionic, Motorola screwed them.

This is how I felt, screwed. Not because I have a strong entitlement complex, but because I paid over two hundred dollars for a device which was thrown to the side by the manufacturers only a month later. Had I known of the Droid RAZR line, I would have waited and purchased one of those instead. Sadly enough, the release of the RAZR products was just after my 30 day trial period ran out, so I couldn’t return the phone if I wanted.

The wait is over! The Ice Cream Sandwich update for the Motorola Droid Bionic is finally here. Motorola and Verizon announced the release just days ago. Unfortunately, the update will roll out only to soak testers first so that substantial software bugs and issues can be ironed out before a widescale release.

Nothing is listed on the official update page, but we recommend backing up ALL PERSONAL DATA on the phone before installing the update. This means that you should backup all of your pictures, personal files, and information that isn’t stored online (some applications store content, server side, via a user account).

If you don’t know how to backup your storage data, we would recommend using Titanium Backup, but it does require root access- so if your Motorola Droid Bionic is not rooted, you can’t use it.

The update is being pushed out in stages, which means usually when it is available for your phone you will see a message in the Android notification bar. You can also navigate to the Android settings menu and check for an update manually.

To do so, navigate to: Settings > About Phone > System Updates

If an update is available, a popup window will appear after manually checking.

Of course, most of the new features in the new Droid Bionic ICS update were just added in the new version of the Android OS. Additionally, because Verizon and Motorola insist on skinning the OS with custom software, there are also some new updates which weren’t added in the OS version. 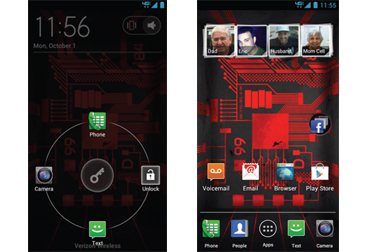 Probably one of the best features in the new ICS update is the added direct access lock screen. Now when you turn on your device, after tapping the unlock icon, you can choose to go straight to your camera, phone Dialpad, or text messaging inbox. You can also just unlock the phone and return to the home screen if you so desire.

This new direct access feature is phenomenal, because you now have immediate access to your most used applications directly from the lock screen.

Also added in Ice Cream Sandwich, is a facial recognition unlock option. Instead of entering a pin, or a pattern, to unlock your phone, you can use the front facing camera to scan and analyze your face. When the phone recognizes the facial features of the current user, the phone will unlock for use. It’s surprisingly fast, convenient and adds an extra layer of security to the phone.

According to Verizon, they’ve also implemented the following features in the latest update also: 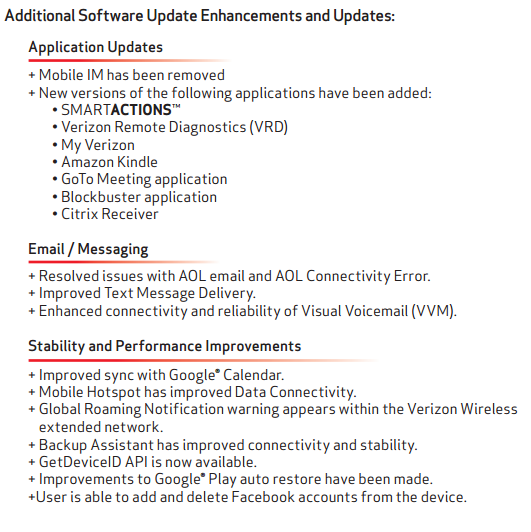 It’s been a few days since the original announce of the update’s impending release. By now, the soak testing should be wrapping up, and the final build of the ICS update should be rolling out to consumers.

Like we mentioned above, get ready for the update beforehand. Make sure you backup all personal information including pictures, notes, documents and anything else you need. There is a fair chance this data will be wiped from the phone completely during the update process.

When you’re ready just look for the update manually, or select “download” in the notification that appears.

If all goes well, you’ll now have Ice Cream Sandwich on your Bionic.

If you need a little more information about the ICS update, you can check out Verizon’s Droid Bionic support page.