When Samsung came out with the Galaxy S2, it was the best Android smartphone out there, offering some remarkable features, and was worth the buy. Within 55 days of its release, Samsung achieved a milestone and managed to receive over 3 million (units) pre-orders for the Galaxy S2. With this huge success, fans around the world were highly anticipated about the Galaxy S2 successor – Samsung Galaxy S3.

Samsung announced the Galaxy S3 in London this year in a much hyped and anticipated event. The device made its debut in the smartphone market on 29 May 2012, and reports say that over ten million units were pre-ordered. No doubt the Samsung Galaxy S3 is one of the most happening smartphone in the market and perhaps one of the best phones Android has ever seen, apart from the Galaxy Nexus.

I got myself this beauty a few days back, and since day one, I’ve been exploring the phone and absolutely love the various features that the phone has to offer. Although this is my first Android smartphone, I’ve personally used the HTC Sensation and HTC One X, and yet I feel that the Galaxy S3 is the best phone I’ve ever used. 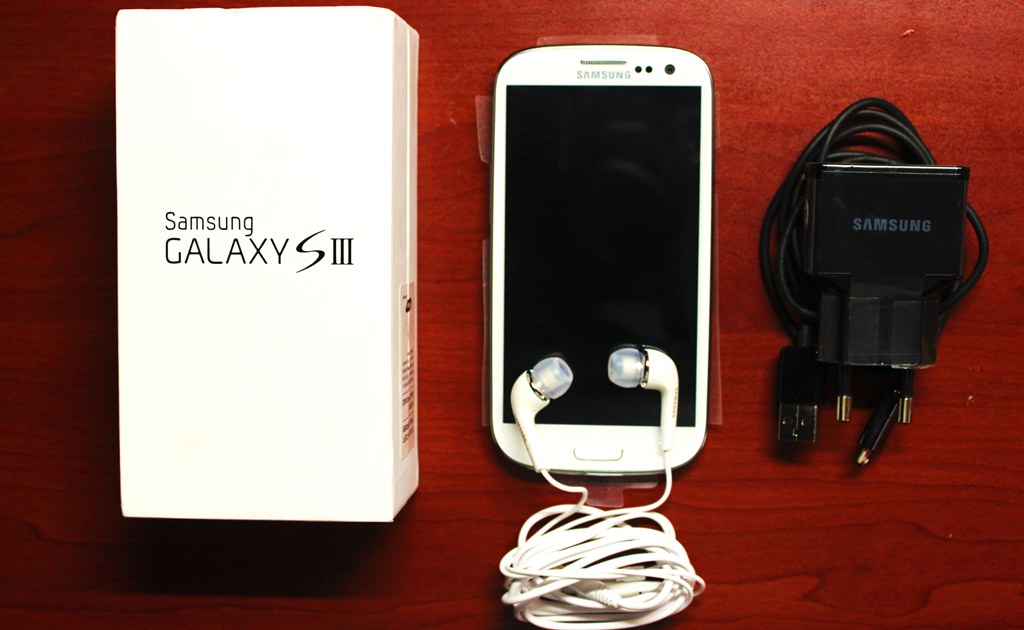 The Galaxy S3 has a shiny design with rounded corners and glossy finish. The edge is surrounded with a thick silver metal bezel, while the thin back cover of the phone is crafted from polycarbonate. The marble white phone is splendidly light in weight with just 133 grams and is 8.6mm in thickness. The Corning Gorilla Glass 2 is a lot better than its predecessor and is now resistant to fingerprints and smudges. Overall design of the Galaxy S3 is simple and minimalistic, yet it looks elegantly beautiful. 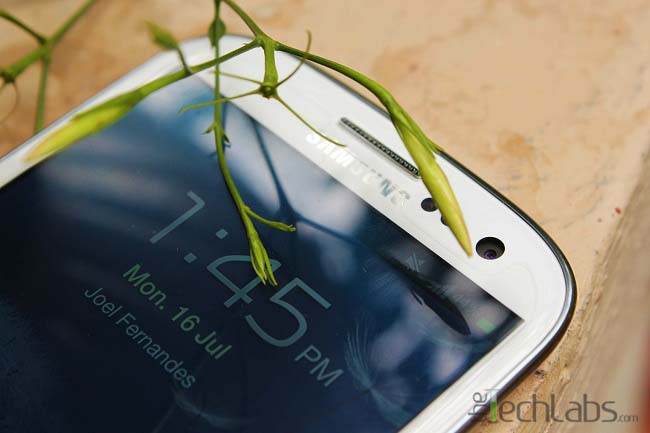 Above the screen, you will find on the LED notification on the left along with a couple of sensors and secondary camera on the right. At the bottom, there two backlit touch keys – menu and back, which look absolutely stunning along with the physical home button placed in between them. I must say that the increased size at the bottom makes it easier to use the keys than the Galaxy S2. The volume buttons are placed towards the left hand side of the phone, while the power button is on the right hand side.

On the back on the phone, you will see the primary camera placed in-between the LED flash and the loudspeaker, along with a silver Samsung branding below it. The mini-USB post and 3.5mm jack are placed on the lower and upper ends of the phone respectively.

The Galaxy S3’s Super AMOLED HD screen is pretty large and is the first thing that comes into notice. With a high screen resolution of 1280×720 pixels and the different screen modes in the Galaxy S3 provide you with rich and vibrant colors, especially when the Dynamic mode is selected.

Performance wise, I suppose the Samsung Galaxy beats every other smartphone out there. The quad core Exynos processor and the ARM Mali-400MP4 GPU make sure that the phone does not lag even under heavy multi-tasking. However, the Galaxy S3 tends to breakdown, like any other smartphone, when there is immense stress and beyond the acceptable limit. This mainly happens when there are multiple tabs opened, active Bluetooth transfer, and music playing in the background, however, this shouldn’t be considered as a problem, since I was testing how much pressure the phone could handle.

The battery back up of the Galaxy S3 is pretty good when compared to its predecessor Galaxy S2. Thanks to Samsung for the improved battery, the phone can now survive a day and a half on a medium usage, however, when on heavy usage, the battery drains out withing 12-16hrs. The problem with the Cell Standby issue is known for a while, and according to an XDA member, there appears to be a fault made by Samsung in the power profile XML file. However, a fix for this should be available in the next OTA update. 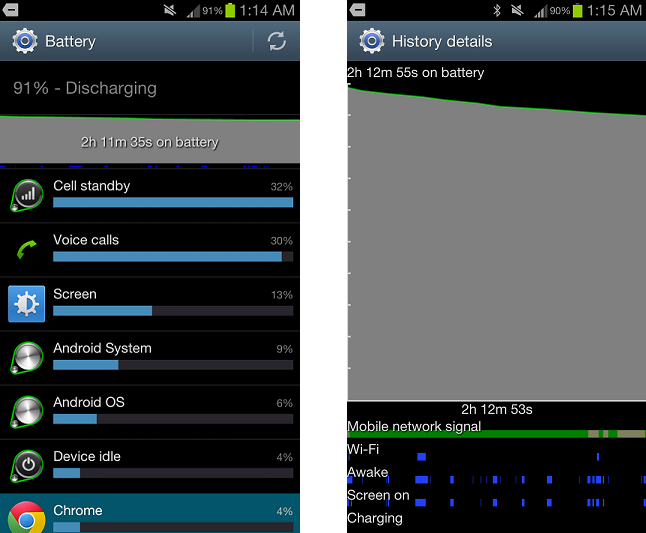 The 8MP camera with zero shutter lag is ideal for photography, and is also capable of shooting HD videos supported by AF and flash. Compered the iPhone 4S, the Galaxy S3 can take pretty decent shots, however, this doesn’t beat the iPhone in anyway. The camera can also be triggered from the lock screen using the motion control. Simply tap and hold the screen with one finger, and then rotate the handset into landscape mode to open the camera app. But please bear in mind that the camera quality is way too low in low lighting conditions as the photos appear too grainy. The most enjoyable thing on the Samsung Galaxy S3 is watching videos on phone’s 720p screen, especially full HD movies.

The Galaxy S3 is capable of shooting full HD video at 1080p resolution. However, the video results turned out to be a little hazy and weren’t impressive enough. 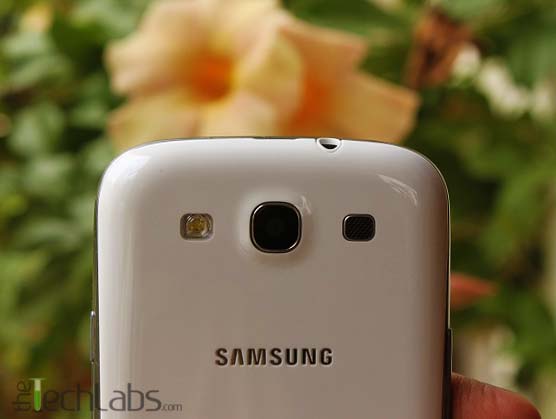 The quality of the sound is far better when compared to the HTC One X. The Wolfson W8914 audio chip equipped in the Galaxy S3 providing a satisfactory quality in sound and lesser noise. Since the speaker is placed at the back of the phone, the problem of low sound quality persists when the phone is placed on a flat surface. Instead, it would have been better if Samsung had moved the speakers to the sides of the phone.

Gaming on the Gaalxy S3 has been lag free, and the experiwnce is super smooth. I’ve pretty much tried most of the 3D games and all of them were running pretty much smooth. Speaking of 3D, I also tested my Galaxy S3’s capacity to handle 3D graphics by running GL Benchmark’s Standard Egypt test. The phone ran this successfully with 59 frames per second, which the same rate as the new iPad. 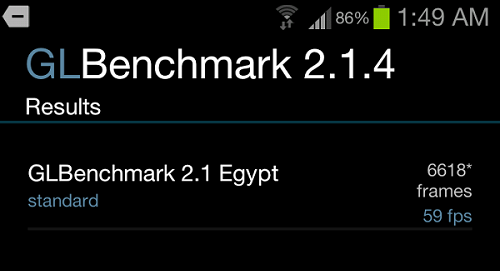 Overall the Galaxy S3 is a great buy if the cons that I’ve mentioned above don’t bother you. It is a brilliant phone with great design, features, and high performance. Keeping in mind that it the currently the fastest smartphone on the market. If you’re planning to upgrade or buy a new smartphone, the Galaxy S3 should be the phone.

The Samsung Galaxy S3 (International version) is being sold online at Amazon for $645.00 for Marble White 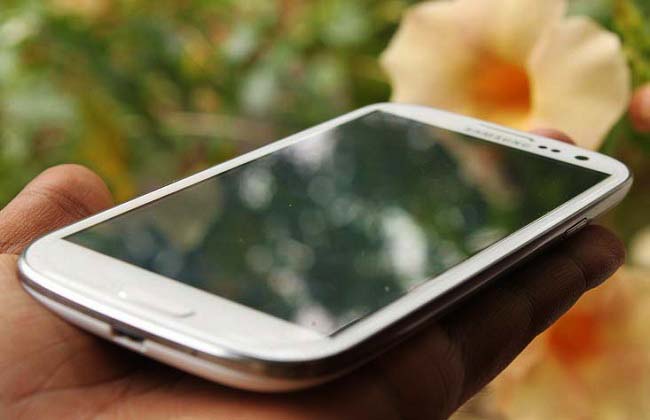