It is finally here.

After months and months of speculation and rumors, we can put everything to rest, at least for another year or two. Apple unveiled everything there is to know about the iPhone 5 yesterday, including juicy details like new features, specs, release date and most importantly the cost.

If you’re anything like us then you need the valuable information first, and you want it right up front so you don’t have to sift through an endless stream of text and content to get it. To accommodate that, and also because we’re just downright groovy, we’re going to cover the price and release date first.

So, without further ado folks, here is everything you need to know about the iPhone 5. 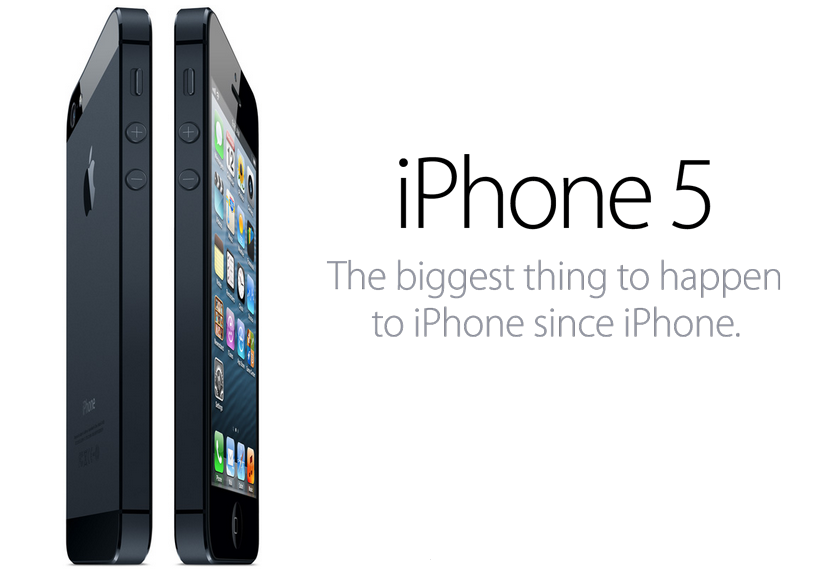 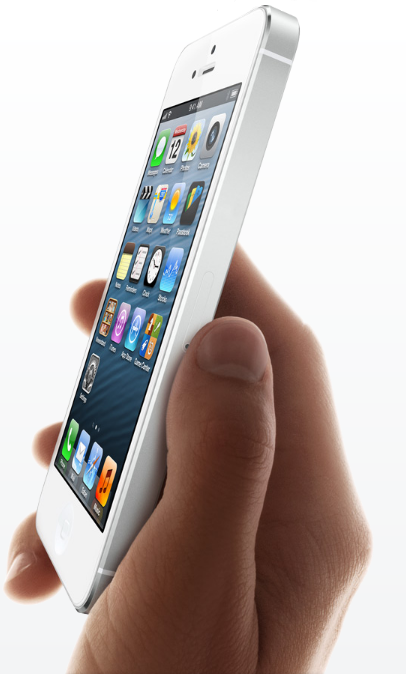 Most people who own an iPhone already know they want the latest model before any of the specs or new features have been announced. That being said, it is clearly preferable to publicize the release date and price first.

The iPhone 5 will be available on September 21, 2012, through Verizon, AT&T and Sprint. You can pre-order your new iPhone online, as early as September 14.

The most notable thing about the iPhone 5, probably more influential than the release date, is the price. Luckily, if you know the current iPhone prices then you already know the cost of the iPhone 5, because Apple has elected to keep the prices right where they are.

To elaborate further, the iPhone 5 will be starting at $199 with a new 2 year service agreement, while the iPhone 4S will be bumped to $99, and the iPhone 4 will be offered for free.

The iPhone 5 has a plethora of new features and improvements over the 4S that make it worthy of the “5” title.

The A6 Processor & Performance

Apple has redesigned the A5 processor from previous models and has now moved on to the A6 chip, which they claim is twice as fast as the A5. Currently, there are no listed core or clock speed details but thanks to Apple’s recent presentation we do at least know some of the benefits of the new chipset. 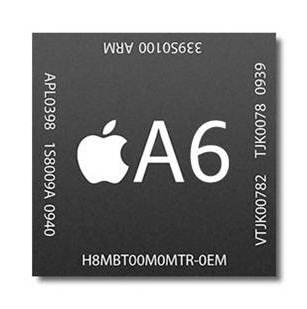 The A6 has been developed with a much smaller form factor, 22% to be specific, which means it takes up less space inside the phone and is also more energy-efficient.

During Apple’s presentation, Tim Cook revealed, that thanks to the new A6 processor, the Pages app will load up to 2.1 times faster on the iPhone 5, and Keynote attachments will be displayed up to 1.7 times faster.

In addition, the A6 processor also includes integrated GPU cores like its predecessor. The mobile games that Apple demoed at their press conference were on par with current gen titles in terms of graphics.

Instead of just making a larger screen overall, Apple decided to keep the same width as the 4S and increase the height of the new iPhone 5 screen. This still allows you to use the phone with one hand, which is a key factor for many users, yet still have a larger screen. 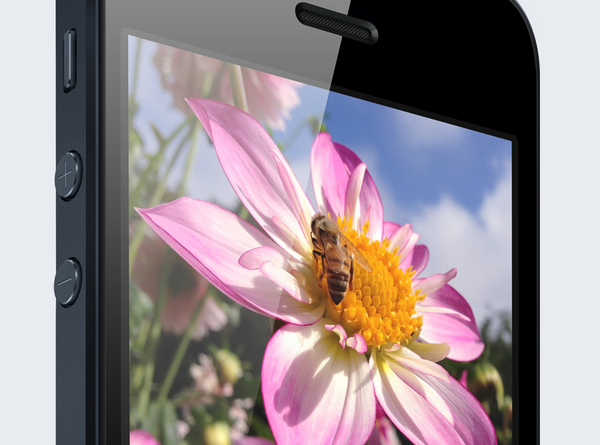 The iPhone 5 Retina Display has a rated pixel density of 326 pixels per inch and supports a maximum resolution of 1136 x 640. Apple also claims the display has received a color boost as well, increasing the color saturation up to 44% more than the iPhone 4S.

The wider screen, when held in landscape mode, is also much more suitable for HD videos which are now displayed in a 16:9 aspect ratio.

For the real tech geeks out there, the iPhone 5 display includes a contrast ratio of 800:1, and a 500 cd/m2 max brightness rating. If you happen to know what those specs mean, you can consider yourself among the elite.

The surface of the iPhone 5 has been treated with a fingerprint resistant oleophobic coating, which is a fancy way of saying finger smudges and skin grease shouldn’t be a problem anymore. 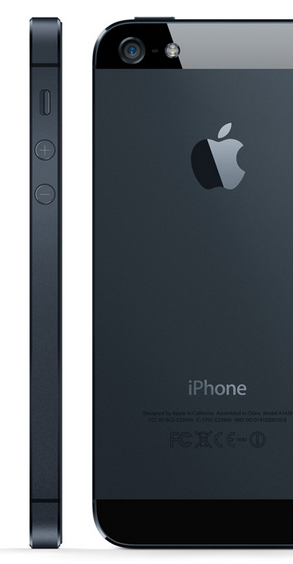 “The thinnest, lightest, fastest iPhone ever.”

The iPhone 5 is adorned with the same aluminum case, and stylish body composition as the iPhone 4 and 4S. So realistically, it does look the same, with exception to a slight difference in aesthetics here and there. 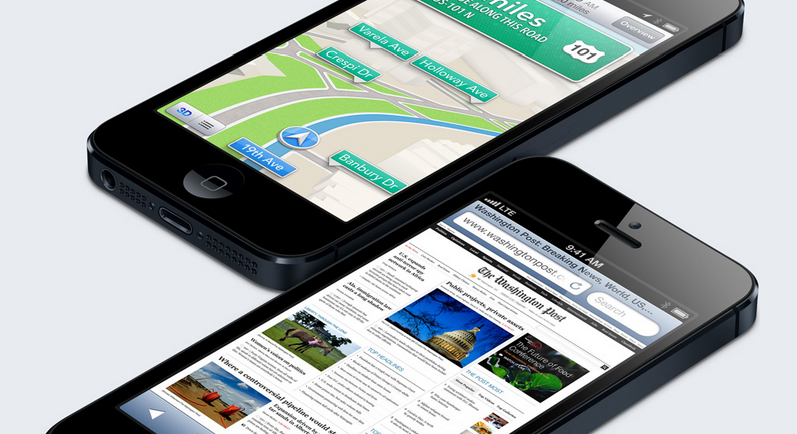 Even with the decrease in size, Apple managed to squeeze in a 4G LTE radio that also supports global wireless connectivity. The iPhone 5 is also compatible with HSPA, HSPA+, and DC-HSDPA networks.

A dual-band Wi-Fi radio offers much faster wireless speeds, in excess of 150Mbps. So, no matter what wireless connection you are using, you will be able to take advantage of faster speeds on the iPhone 5.

Bluetooth 4.0 wireless functionality ensures you can still use your favorite Bluetooth peripherals with the iPhone 5, but honestly who didn’t assume this would be included?

A digital compass, GLONASS support, and assisted GPS functionality ensure you can use location services and won’t get lost.

The iPhone 5 still has an 8 megapixel camera like the iPhone 4S, except it is about 25 percent smaller and has much better lowlight performance according to Apple. The new lens also has increased noise reduction features, and takes images up to 40% faster. Other features include autofocus assistance, LED flash, improved video stabilization, and facial recognition support for both video and still images. 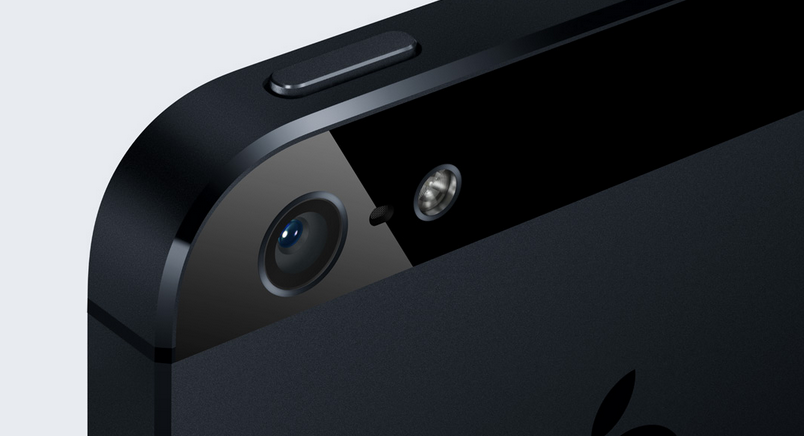 Photo and video geotagging options mean that your images will include advanced geography data for all those nifty geotag photo apps that display your pictures on a map; if you must have an example, we’re talking about what Instagram does when it displays your uploaded photos on a local map.

The rear camera is capable of recording full HD (1080p) video at up to 30 frames per second with audio. There is more exciting news though, the front facing FaceTime camera (1.2MP) is capable of capturing HD video (720p) at 30 frames per second. Most front facing cameras could only dream to capture HD quality video, as they are usually devoid of higher quality. Rear cameras usually hog all the gusto as far as image and video quality goes.

We haven’t even covered the best feature of the new iPhone 5 camera though. Apple has implemented a brand new Panoramic capture system that allows you to take panoramic landscape images of up to 28 megapixels. Thanks to the internal gyroscope, all you have to do is open the Panoramic app and then sweep your phone slowly across the scene so the camera can capture the full image. You can create images that contain up to 240 degrees of scenery around you. The Panoramic capture system will even stitch the images together automatically and remove artifacts and unusual shapes that are created from moving elements. In other words, you don’t have to worry about the photo being ruined by blurry objects or subjects.

Recently, the airwaves blew up with the news that Google’s services had been pulled from current gen iPhones. One of the first services to go was, in fact, Google Maps. You could almost hear the groans from everyone, because that meant losing a well-established navigation service. Say what you like about Android and Google, but Google Maps is certainly a worthy navigation platform. 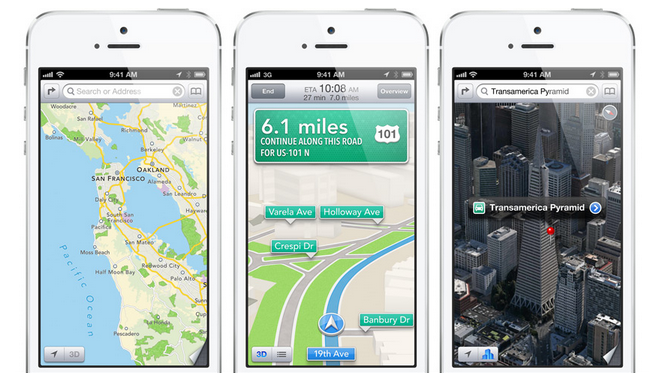 Luckily, Apple was primed for the scenario with Maps. Now, keep in mind that Maps has been around for a while, but the iOS 6 version adds some much needed improvements.

The new Maps is capable of GPS navigation with voice directions, and real-time traffic updates that also help reroute you around congested areas. A relatively new feature called Flyover, allows you to zoom in on select cities and view interactive, and photo realistic, 3D views of buildings and landmarks. During the Apple conference, they demoed a Flyover of Paris, France and showed everyone the Eiffel Tower using the new 3D view.

Most smartphones on the market have horrible battery life, and thanks to the widespread adoption of demanding LTE networks, battery life has just decreased even more. Relatively speaking, iPhone users have always experienced phenomenal battery life. Besides the fact that the battery is proprietary and cannot be changed by consumers, Apple knows what they are doing when it comes to power and energy-efficiency.

The new A6 processor is faster and more energy efficient. That means the iPhone 5 will see an increase in battery life over the iPhone 4 and 4S. 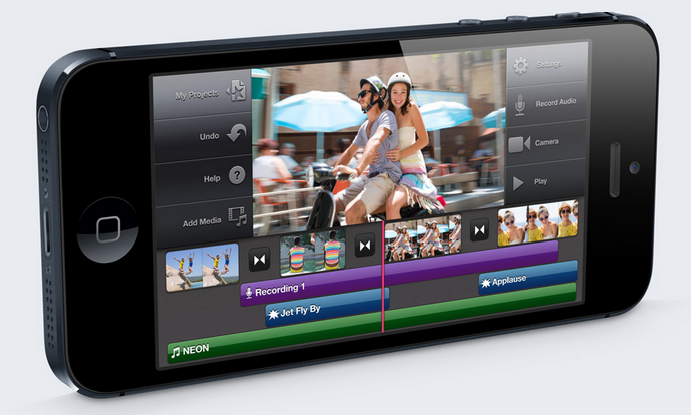 Apple estimates that, on average, you will get up to 8 hours of use while browsing the internet and social media networks on an LTE cellular connection. They have also quoted up to 8 hours of talk time via 3G and up to 10 hours of video playback time.

Since we can’t forget audio playback, one of the most obvious uses of modern smartphones, it will last up to 40 hours.

As always, the iPhone 5 can be charged via USB when connected to a computer or to the power adapter. Unfortunately, the connection port in the iPhone 5 has changed which means you’ll have to buy adapters for all those iPhone peripherals you already own. 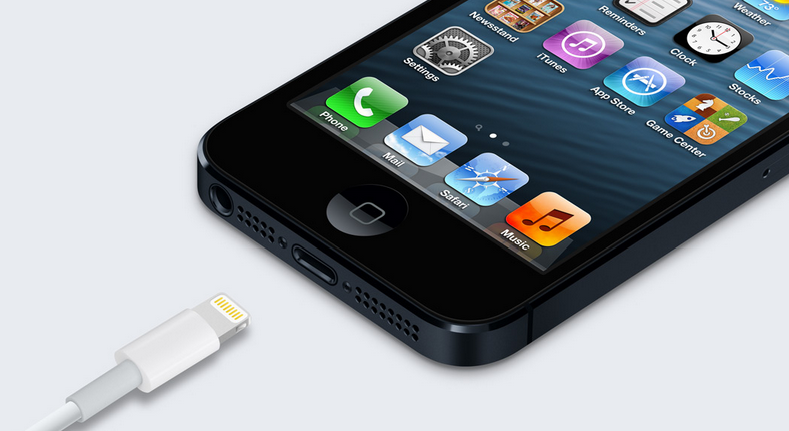 Another unique feature of the new connector is that it is fully reversible, which means that there is no perfect way to plug it in. You won’t have to fumble around in the dark anymore to plug the connector into your phone or power adapter.

Apple has also made adapters available that allow you to connect existing peripherals with the new connector. If you must know, the adapter is called the Lightning to 30-pin Adapter.

Of course, the iPhone 5 will also make use of all the standard features thanks to iOS 6, like built-in apps for messaging, and email. Siri is back, more fleshed out, and includes a plethora of improvements for iOS 6, as well. iCloud services are back too so you can keep all your content in the cloud and stream appropriate media to your device.

A new iOS 6 feature, that has been demanded by iOS users for some time now, is Facebook integration right into the OS, just like what has been done in the past with Twitter. Now there is no need to use the actual Facebook app in order to post status updates and respond to friends, you can do that right within the OS with themed popups and windows.

Certainly there is much, much more to iOS 6 than what we’ve listed here but that information is for an entirely different story.

Oh, and Apple is using new EarPods now too. They’re new because they have a new body design, check them out!

That’s it for now! We hope you enjoyed reading up on the new iPhone as much as we enjoyed covering it. Be sure to stay tuned here at the Tech Labs for more information and updates in the coming weeks!