Samsung is all set to come out with the next edition of their Galaxy S phone, Galaxy S IV. Samsung is generating massive hype for this new phone almost like what Apple does. Leaking snippets and rumors but not letting the whole story get out of hand. Of course, Apple rarely pre-announces anything but Samsung chose to proclaim the coming of the Galaxy S IV. Samsung is among the top smart phone manufacturers in the world today and its products command attention.

The Samsung Galaxy range of phones are leaders in the Android market and are second only to the iPhone 5, which is named the single most prevalent smart phone in the world. Samsung sure has a fair amount of ground to cover if it hopes to challenge Apple’s position. Samsung briefly overtook the competition last year when the Galaxy S III wave was riding high. This has certainly bolstered Samsung’s hope that probably Apple can be beaten. It is no easy task to beat Apple though. The iPhone undoubtedly delivers a trend-setting smart phone experience. The extremely well-rounded ecosystem combined with solid hardware gives a beautiful user experience. The Galaxy seemed to be missing some of this flair that Apple has all but trademarked. But things could now be different with the S IV.

Work The Magic
Apple describes its products as magical. The justification for this has been in the ‘wow’ factor that Apple somehow injects into its products. Jelly bean was a major leap towards bridging this gap between Android and Apple but it’s still wanting in terms of mobile experience. Apple has forever been a pioneer of the smart phone industry bringing in many market-shaking technologies. Apple’s fluid animation that responds to touch instantaneously is inimitable.

Samsung does have a few tricks up its sleeve as well. The Smart-Stay feature uses the front camera to identify the users gaze and doesn’t allow the screen to time-out. Although, to claim an actual magical experience Samsung would have to make the phone receive commands with the user’s gaze or by the user’s voice, no less.

An Improved Ecosystem
The iTunes and cloud ecosystem provided for the iPhone is an instrumental part of its success. Seamlessly integrated data storage and backup took the iPhone to another level. The Samsung ecosystem pales out in comparison. Multiple digi-storefronts and cluttered cloud-storage systems coupled with third party data-sync systems. It’s a whole new level of messy systems compared to the ease of Apple.

Samsung would need a robust ecosystem. It can either use the Google play, which is fairly consistent and reliable or it can go all out and come up with its own system. 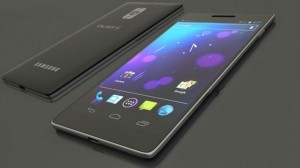 NFC
Near field communications or NFC is a desired technology in the smart phones of today. NFC mobile payments are undoubtedly in the works for Samsung. This is an area that Apple chose to stay out of. Samsung’s partnership with Visa will most definitely see the NFC payments go mainstream.

A Game Changer
Samsung is set to launch its second major product since the iPhone 5 came out. However, Samsung needs to take a look at the most important rule of Apple. Always come out with an outstanding product. Any chance that Samsung will have of stealing Apple’s crown can only be made possible by a new game-changer and not just a plain upgrade.