It’s that time again, where we go over the latest Angry Birds title and describe our experience with the newest game in the series – this time we’re featuring an Angry Birds Space review. Yes, the same lovable birds are back and this time they’re going where no fowl has gone before.

Angry Birds Space was only released just last week, and yet it has already secured over 10 million downloads in a three day span. It goes to show that mobile gaming, is not just a minority deal anymore, and it’s time to take it seriously – 10 million is a record breaking number. The information, or announcement for that matter, was made via Rovio’s official Angry Birds branded Twitter account.

As you can see from the image of the tweet, Rovio has continued to reel in massive success with its latest Angry Birds title. But they don’t plan on riding the success for long, like they did with the original title, because they’ve voiced plans to release more Angry Birds games this year. As many as four new Angry Birds games will soon be available, and you can bet on Tech Labs reviewing each title just like our Angry Birds Space review.

But that’s enough shmoozing for now, let’s move on to why you flocked our way – the Angry Birds Space review. 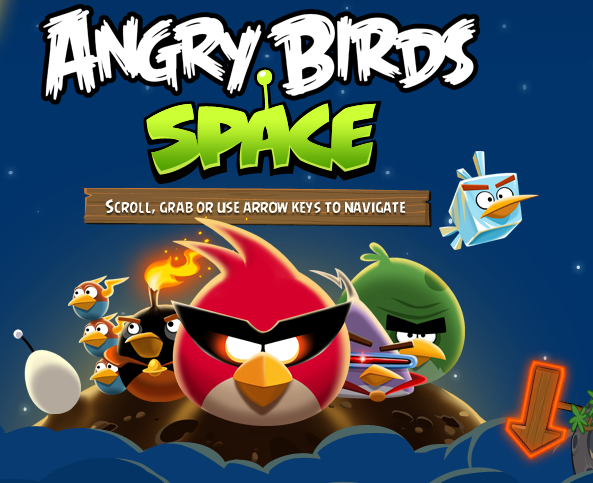 Rovio has taken the same basic principles of the original Angry Birds and improved upon them with some great new features and mechanics that make Angry Birds Space a fun, yet completely different title altogether. The most interesting addition to Angry Birds Space is the use of gravity and zero gravity space environments in combination with each other. Instead of just simply launching the birds in the usual fashion, players must also take into account the affects of low gravity and how it will influence their birdly counterparts. Yes, we said birdly.

Players still whip the agitated birds with a slingshot across a small-scale map in an effort to destroy structures and fortifications, which the evil green pigs cower behind. If you’ve never played an Angry Birds title before, the ultimate goal is to maim and destroy all the evil green pigs, which have – time and time again – stolen the birds unhatched eggs.

The pigs spend most of their time huddled safely behind protective structures exclusively within the atmosphere of various planets and asteroids. If the player can battle through the atmosphere of the asteroid and somehow knock the pigs senseless or shove them into space where they will freeze, then the level is won- wow, so ingenious. 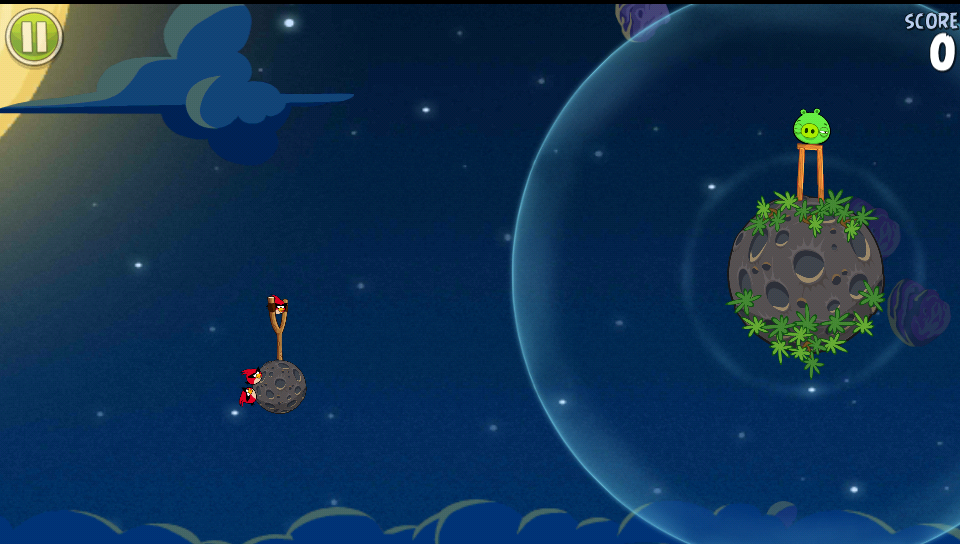 In place of the golden eggs, which can be collected in the first Angry Birds to unlock new levels, players can collect “eggsteroids” which work exactly the same way. However the bonus levels in Angry Birds Space are uniquely themed and pay homage to some of the best classic games ever made like Super Mario Bros, Galaga, Space Invaders, and Breakout – they also offer a quick break from the usual, but quite repetitive, bird flinging gameplay.

The same flock of birds plays a role this time around with exception to a few extras. In Angry Birds Space players can fling the normal red bird, the mini/triple blue bird, the large clumsy green bird and the black bomb bird. A new ice bird has been added that freezes any objects, and piggies, it touches – and it has an alternate blast mode that freezes a larger radius of objects around the bird, but also destroys it. The yellow triangle bird has also been tweaked this time around, to launch or boost specifically in the direction the player taps. 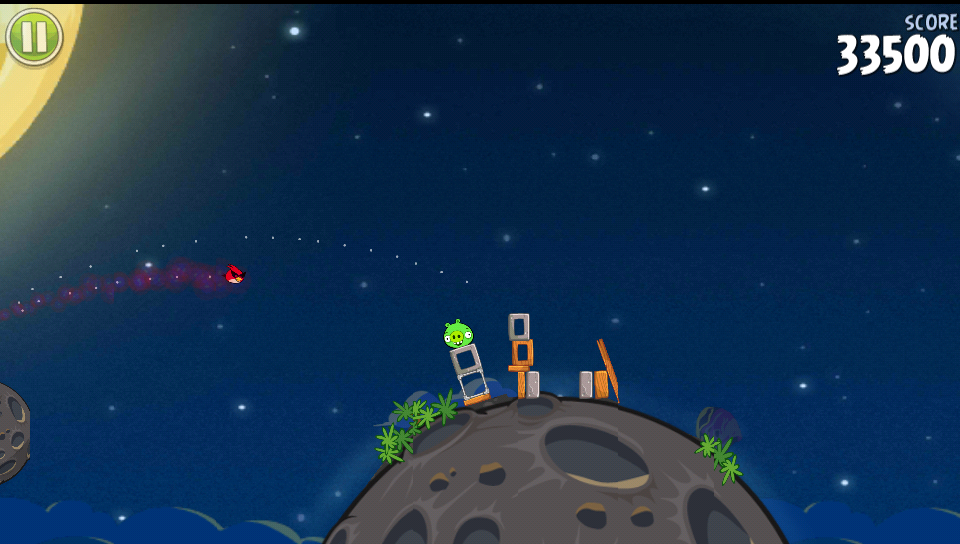 Players can also take advantage of the Mighty Eagle which returns from previous titles with a slightly different use for it. The Eagle (rightfully dubbed the Space Eagle) is now a consumable, which means players only have a fixed amount to use unless they collect or purchase more. If players aren’t keen on purchasing the Eagles, they can unlock more simply by completing difficult challenges or progressing in the game. The Mighty Eagle itself is not quite as powerful as in the previous Angry Birds titles, but it does still clear a wide swath of obstacles when used.

Angry Birds Space is significantly cheaper than most games on the market today, but some mobile gamers might find themselves slightly taken aback by Rovio’s newest marketing tactics. The game itself only offers players the first 2/3 of levels and challenges, with an option to purchase DLC that opens up the final 1/3 of the game’s levels for play. The final 30 levels purchased through DLC offer a hardcore and more challenging experience than the original core levels of Angry Birds Space, but they also cost an additional 99 cents to unlock. We could readily gripe and moan about how such tactics are cheap marketing ploys that have been adopted with the sole intent of reeling in large sums of cash, but then we realized – it’s only 99 cents.

The core game is still available to download for free, through an in-game ad supported version. Sometimes the ads can be obtrusive, despite claims that they should be unobtrusive but regardless – free is free. 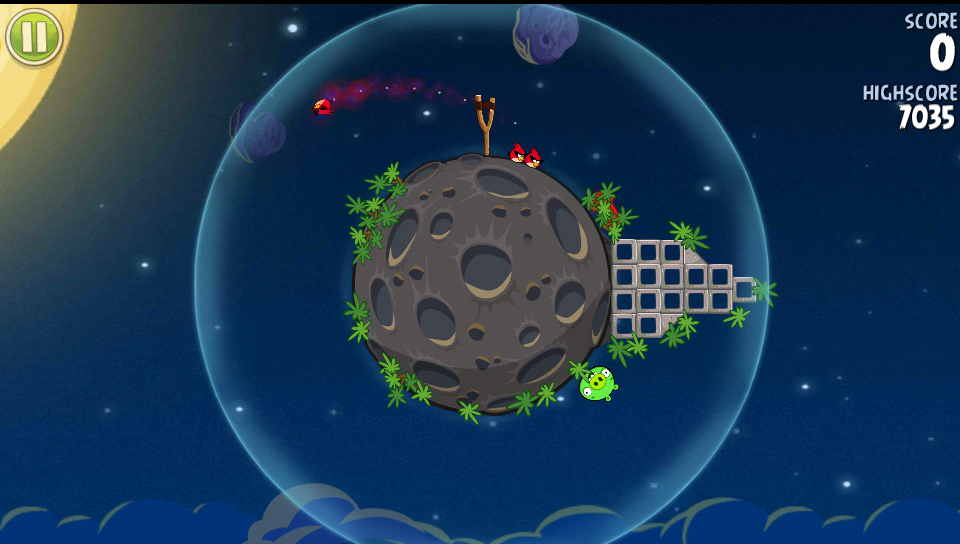 Keep in mind here the core 60 levels (2/3 scenarios) in Angry Birds Space are not poorly designed, in fact it’s exactly the opposite – all the levels in Angry Birds Space offer a fresh and interesting approach to the well loved tactics. Even the bonus levels in the game offer up fresh experiences, albeit with a slightly nostalgic approach. If you’re a newcomer to the series, or have never liked past offerings now is the time to fly back- or at least give it another go. The low gravity and space mechanics in Angry Birds Space launch it to new heights, and ensure the game offers a completely different experience from the original.

It’s likely that Rovio will eventually release more DLC for the title in the form of additional levels and game challenges, so for those few players who happen to rush through the game in its entirety, it shouldn’t be long before more content is offered up.

Don’t worry, we’re not talking about the final flight of the Angry Birds franchise; there will be more to come- we’re just referring to our final reflections on the game. 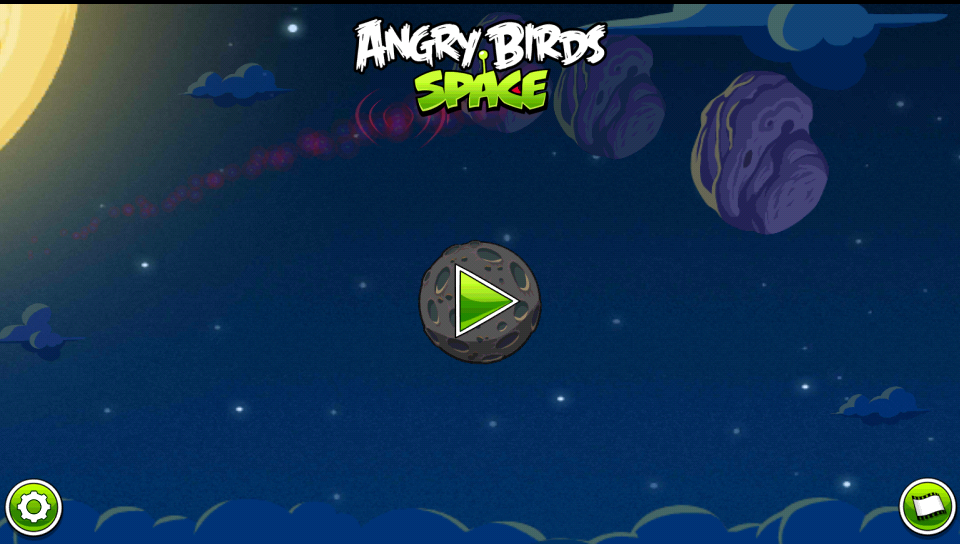 Angry Birds Space offers up a completely new experience with a mixture of the same bird flinging mechanics, and it manages to offer enough new features to be considered a completely different experience from the original title. Newcomers and Angry Bird fans alike will love flinging the peeved birds through the wide expanse of space.

So, to conclude this Angry Birds Space review we’ll state that the latest title in the franchise is definitely worth a purchase or at the very least, a try.

If for some miraculous reason you’ve never heard of Angry Birds before, or haven’t had the chance to come across the pricey plush dolls littering department stores and the new gummy treats available at grocery stores- you can check out our alternate pieces about the other infamous titles in the series. In fact, The Tech Labs has some of the most extensive coverage of the Angry Birds series available – feast your eyes, or fling your eyes rather, below.