One of the thinnest notebook, Dell XPS 15z Notebook is just ready to be rolled out globally. Dell has picked up pace with the launch of this product which is first in the series of its new super thin and ultra-powerful products. This would prove out to be just the perfect choice for everyone; from students to small-business owners and everyone in the middle.

Dell has shown sincerity in being true to its launch date of May 24, and has launched the ultimate successor to the Adamo series. This “thinnest 15-inch PC” is now available everywhere in the world, so why not avail the opportunity?

Dell has taken a MacBook-like approach in coming up with the Dell XPS 15z and there are some surprising similarities found in the two. Dell’s notebook is provided with a brushed anodized aluminium casing and has the exact same side speaker grill just like that of Apple’s flagship notebook. 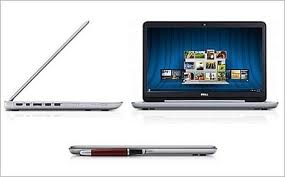 Dell has focused not only on the looks but has provided the machine with some of the best hardware functionalities too. The Dell XPS 15z has either a Core i5-2410M or Core i7-2620M Sandy Bridge processor, along with as much as 8GB of DDR3 RAM (shipped with 4 GB of RAM). Moreover, the 15.6 inches laptop can be further customized in order to get an optional Full HD panel with a striking resolution of 1920×1080 pixels to accompany the NVIDIA GeForce GT 525M GPU with either 1 or 2 GB of video memory. Also, the system supports both Nvidia 3DTV Play and Nvidia Optimus technology, so that switching between dedicated and discrete graphics can be made possible in order to save power when you aren’t in need of serious graphics processing. The storage on the notebook is; however, up to 7200RPM 750 GB HDD and it doesn’t have any SSD options. The notebook operates via an 8 cell battery that can last as long as 8 hours. The Dell XPS 15z has an astounding light weight of only 5.54 lbs or 2.5kg.

The notebook comes with an HDMI 1.4 output for the purpose of connecting to a big screen. It also supports a slot-loading DVD±RW drive. Other functionalities include Bluetooth 3.0 wireless networking, two USB 3.0 ports, a dual USB/eSATA port, a 9-in-1 media card reader, a 1.3 megapixel webcam, Mini-Display Port video output, and gigabit Ethernet. The Dell XPS 15z is shipped in less than an inch thick; about 0.97 inches thick case.

Dell XPS 15z Notebook: What’s in it for you?

The best thing about the Dell XPS 15z is that it includes a lot of features similar to that of MacBook Pro with only a not so similar price, thankfully! This ultimate super thin notebook can be acquired for as less a $999, and can be ordered from the Dell website. Dell has promised to keep bringing more Inspiron and XPS notebooks featuring similar designs in the future, so keep holding your breath.