My computer was made by Sony®. My phone was made by Motorola®. My tablet was made by Asus®. My camera was made by Cannon®. I use Cox Communications for my Internet and Verizon Wireless for my phone. But what if my laptop, tablet, camera and phone were all made by one company? Wouldn’t that be convenient? I think so, and so do the developers of the Fujitsu Lifebook 2013 Concept.

Keeping organized in an increasingly fast-paced world can be nearly impossible. I, personally, do not have the time to upload my photos and videos as often as I would like to, I use cloud storage to access files that I need to view on my tablet, and I would rather have a device that encompasses every aspect of my tech needs. Fujitsu developer Prashant Chandra seems to have similar views and the brainchild of his desires is the Fujitsu Lifebook 2013 Concept.

Getting Attached to the Fujitsu Lifebook 2013 Concept

The Fujitsu Lifebook is a ‘single convergence device’; which simply means that, similar to Legos™, it connects. And not just to the Internet; it connects to your tablet, phone and camera. In fact, it is a tablet, phone, camera and laptop. The keyboard is a touchscreen tablet that detaches and becomes its own device when separated. The smartphone can be inserted directly into the front to transfer data and then removed for use as a handheld media device. 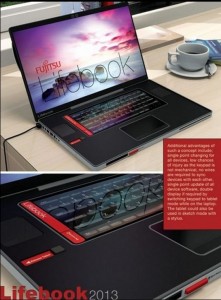 What’s even more convenient (or inconvenient if you misplace your tablet) is that the tablet part is the keyboard. There isn’t another keyboard. (Personally, I think that keyboards are antiquated, it’s time for something better and the touchscreen isn’t quite “it”. Don’t ask me what would be better; I’ll say: “something”.) The benefits that are apparent lie in the wireless communication and connectivity. In a world of wires, it gives me hope that companies like Fujitsu are thinking of world with no strings attached; only other wireless devices attached; and hopefully a battery that can keep it that way.

But don’t we already have wireless connectivity? Do we really need to displace storage area that could possibly make Windows function properly? The only issues that the Lifebook appears to address are the current incompatibility issues and data transfer rates. I imagine that the tablet keyboard will come in handy and the phone slot. However, in all honesty, we can email data from our phones to our system or throw files into Dropbox or some other cloud storage. Most phones and tablets have cameras; they are definitely in need of technological improvement (maybe just a focusing lens would work… but it wouldn’t enable the dwindling camera market to make ends meet; unless they designed the lenses…) 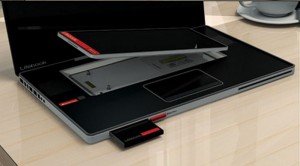 The Fujitsu Lifebook 2013 Concept is not the first item to use ideas such as those that it employs. However, it is the first to portrait them all-in-one and even if the idea isn’t ideal all around, it is likely that it will spawn a new breed of thinking when it comes to mobile media and compatibility. The idea put forth by this concept from Prashant Chandra and the Fujitsu Company is definitely a good direction and will hopefully be implemented in realistic ways before 2013.