Samsung has launched its next premier smart phone. Galaxy S4 is a beauty to hold and operate. But the event where it was launched was very much Apple like. Apple tries its best not to let anyone know about its product being launched. But Samsung had already told when and where it would be launching the S4 and kept no secrets.

Although the Korean giant has gained a lot of respect worldwide, it still has a lot to do. The iPhone was developed with years of research. Samsung committed a lot of mistakes while producing products during those times. From quality to what is inside; Samsung has been experimenting a lot with its handsets. But now, it has put forward a bigger challenge for Apple. The S4 could provide tough competition to the iPhone. Experts predict the S4 to overtake it as the most popular phone worldwide.

People at Apple worked very hard on their every product. But Samsung is now gaining pace. Here are a few points that might help it to fare better than the iPhone:

Innovation
Apple has been a pioneer in many fields. It has developed a number of features from the touch phone to features like Face Time. And this is why it is so difficult to challenge Apple in the smart phone market.

Samsung’s Smart Stay uses the camera to detect whether you are watching the phone or not. This can enable the phone to pause a video being played etc. But that is it. The company needs to be more innovative and take this technology forward. It should think of voice operated keypad locks for more security. Such different ideas would help it carve a separate technological niche for itself. And this magical concept would definitely help it to overtake the iPhone.

Better Experience
Apple’s iTunes has been a major attraction and benefit for its users. Along with iCloud, it offers a huge cache of stored data. The interconnectivity amongst the phone’s software and these features is very impressive. This has ensured that users get a more simplified device in their hands.

Samsung, on the other hand, does not have such a system. It needs to work hard to build a network of these features. Exploiting Google Play in this regard could prove beneficial.

Intelligent Features
It is said that Samsung puts in a lot of features in its handsets. Barring a few of them, most of the features turn out to be not very useful. For example, Share Shot (wherein a picture can be shared with different people at the same event) just could not get off to a start.

The face identification worked pretty fine in the S3. But had it been linked with Facebook, it would have added more zing to the overall appeal. 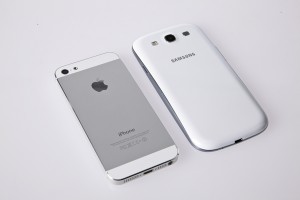 Improve Durability
By having a plastic back cover for its handsets, Samsung degraded itself a bit. This was done to reduce weight of the devices. But it also left the handsets more vulnerable to damage during drop tests. However, the company has improved the features in S4. The device is easily comparable to iPhone 5 in terms of stress test results.

Added Facilities
Mobile payment was a facility that became quite famous a few years back. But it never really gained pace. Samsung can target this area and work upon it. Apple has not paid much attention to mobile payment and it does not seem it would do so in the future as well.

Near field communication can come really handy in this regard. Samsung might very well be the pioneer of this technology.