When Microsoft announced Windows 8 and released the developer version, it created a lot of buzz around the Internet. With all the new Metro UI and Cloud integration, Windows 8 has certainly taken a huge step in the world of computing. However, the buzz that Windows 8 created was all diverted towards Ubuntu 11.10, when the folks at Canonical released it few days back.

Microsoft’s Windows has managed to lead the competition in the Desktop OS market with 91.9 percent market share, while the Mac OS has a 6.9 percent market share. However, now the popularity of Ubuntu is rising, and Microsoft has a new level of competition in the OS market. Ubuntu is the next big challenge for Microsoft and it might prove Microsoft wrong, which once thought that Linux was over and done with.

When I had my first glimpse at the Microsoft Windows 8 developer version, I was totally impressed with its looks and features. However, I was more captivated and fascinated towards Ubuntu 11.10, and just like a small kid, I was excited about it. And certainly, Ubuntu kept up to my expectations by bringing in vast improvements and many awaited features.

Let’s take a close comparison between Ubuntu vs Windows 8.

I must admit, both Ubuntu and Windows 8 have an extraordinarily beautiful design with highly refined glass effect and high resolution icons. Windows 8 will be using the Metro UI, while Ubuntu sports the Unity Interface.

The Windows 8 interface supports gestures, snap, pin, cloud applications, sharing of apps and services, hidden task bar on the right of the screen and so on. The Metro UI is a huge step taken towards design and UI by Microsoft, and is certainly far more striving than any other UI we have seen before. This also fits in with tablets, as Microsoft demonstrated the OS running on tablets from Samsung and Lenovo.

Ubuntu’s UI on the other hand has an improved Unity Interface with richer set of “Scopes and Lenses”, instead of the old “Places” function. Since users were confused and didn’t know what to click on, Canonical decided to integrate Ubuntu icons with the Dash and Unity launcher, for providing more visibility. 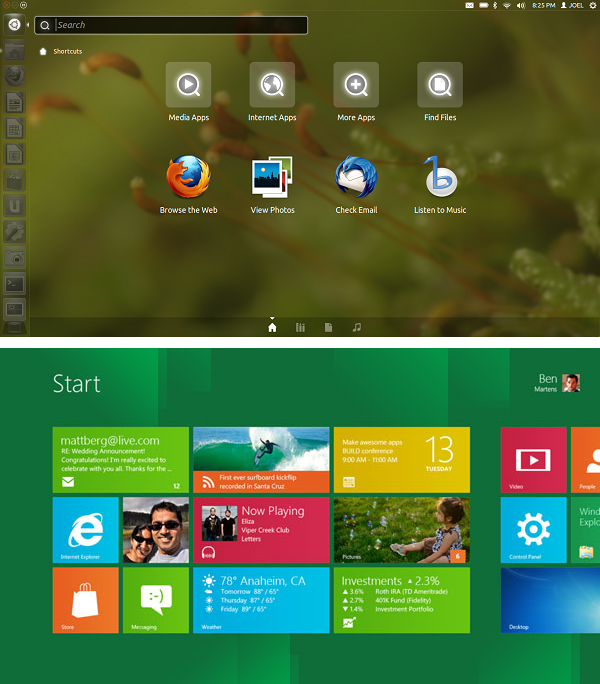 Clicking the Dash (or the Ubuntu logo on the left) will bring up a glossy set of icons, which are most commonly used – Browse the Web, View Photos, Check Email or Listen to Music. It comes with a search bar which will be frequently used by users. It’s not just easy to search, but it is blazingly fast. The left panel consists of applications which are most commonly used, and users have the option to add an application by simply dragging it in or remove it.

All of us have used Windows and we all know that Windows mainly lacked the social networking feature. From the Windows 8 version onwards, Microsoft has decided to integrate essential social media features in its desktop. Ubuntu on the other hand, has always included social media features in its default desktop. Gwibber has been Ubuntu’s default social media client, and with the release of Ubuntu 11.10 aka Oneiric Ocelot, Gwibber has been revamped which is faster, lighter and prettier than its previous version.

Windows 8 and Ubuntu 11.10 will both be integrated with the cloud. This will enable the OS to download photos and apps from the cloud, share with friends and upload them on the go. Additionally, Ubuntu 11.10 will support the Ubuntu One, a free online backup service with 5 GB of cloud storage. You can avail more space by pay plans – $2.99/month or $29.99/year.

Ubuntu 11.10 comes with free photo editing tool called Gimp, and Open Office for word processing. However, for Windows 8 you need to purchase a licensed version of MS Office. The free applications that Windows 8 comes with are Windows Live messenger and Internet Explorer 10.

Apart from that, Windows 8 will have a Windows Store, similar to Apple’s App Store, enabling users to download and purchase new application for their desktop. Ubuntu on the other hand has always offered an App Store-like ability to add or remove open-source applications. With Ubuntu 11.10, the Software Centre is more shopper-friendly, with reviews and ratings and is much faster than it was before. This makes app discovery a lot easier.

In terms of speed and booting, Ubuntu wins the race. The boot time of Ubuntu is quicker than Windows 8, and there’s no doubt about it. Ubuntu is light and designed in a way to perform faster. It is faster on both old and new hardware configurations, while Windows boots faster than Windows Vista on old hardware.

Ubuntu has the LightDM as the new default login screen. LightDM brings easy customization and can be tweaked with a tool called LightDM Manager. This will allow you to change the background as well as the logo of Ubuntu 11.10 login screen. 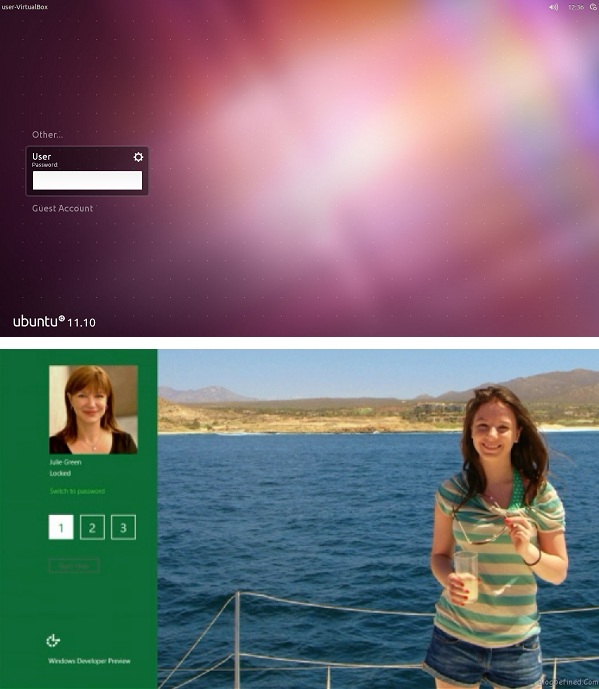 The Windows 8 lock screen is similar to the Windows Phone lock screen, displaying the date/time, scheduled appointments and unread message summaries. You can personalize the login screen by changing the background to something of your own. Windows 8 supports the traditional password login or the new picture password tool, where you can select a picture to use as a reference grin to create a three-point pass gesture.

Ubuntu vs Windows 8 – Availability and Customization

Ubuntu has always been free, and continue to remain free. You can customize the OS to the maximum level possible, and the only cost involved is the download time and nothing else. Windows 8 and its earlier versions have to be purchased and cannot be customized whatsoever.

Alternatively, Users currently running Ubuntu 11.04 on a desktop can upgrade in place via the command update-manager -d.

Windows 8 is currently released under beta version, and the developer preview can be obtained from the Microsoft website. Here’s the direct download link for Windows 8 Developer Preview:

One great thing about Ubuntu is that you can try the OS from the cloud without having to install it. If you’re impressed with the demo, then you can continue downloading it. Click here to try Ubuntu 10.11 for free.

Unfortunately, there isn’t any option to try Windows 8 without having to download. We can probably expect such an experience in the next release of Windows.

Ubuntu vs Windows 8 – Who Wins?

It’s certainly a tough job to decide who wins the Ubuntu vs Windows 8 race. When it comes to usage, I think Windows will do a better job, however in terms of design and functioning, Ubuntu gets the reward. Overall both the OS are good in their own way. Since I favor Ubuntu, I would vote it the best. What about you? Please answer the Ubuntu vs Windows 8 poll question and let us know why your thoughts through comments.