Arguably the most shocking news regarding iOS 6 was the loss of the native Google Maps application. Shortly after the release, people felt that they would be content with using what appeared to be an upgraded version of the app that comes built in to Apple’s mobile platform. Instead, the smartphone giant was victim to what could very well be the most criticism the company has ever received. Terrible reviews of Apple’s own mapping software quickly surfaced, and customer frustration continued. It is not characteristic of Apple to release something that was clearly not even close to being complete, which left many wondering why they made the decision to drop Google’s trusted map software.

It is fairly evident that Apple and Google don’t get along very well. Constant legal battles, coupled with an extremely competitive market, have made these two large companies bitter rivals. So, it is no surprise that when Apple decided it was time for a change, they were going to leave part of Google behind. Unfortunately for the iPhone maker, leaving Google completely is a much more difficult a task than simply getting rid of their apps.

Consumers would be more than outraged if they heard that Apple had also ditched other key Google components, such as the Google search bar. However much the two companies dislike each other, there will always be a small level of integration in iOS devices.

As Google Maps skyrocketed to top of the charts in Apple’s App Store, a level of embarrassment was to be had by Apple. Within forty eight hours of its launch, this app received more than 10 million downloads from iPhones – surely some sort of record. And while Apple sinks deeper into the hole it has dug for itself, the release of Google’s mapping software isn’t all bad news. 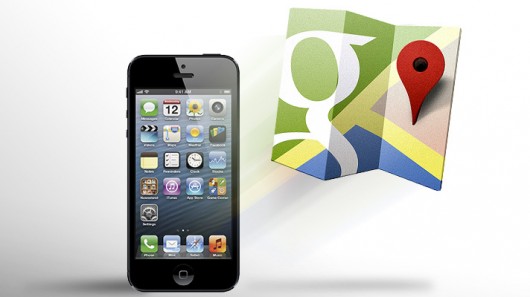 Customers can now feel confident updating their devices to Apple’s newest mobile software. This is important to app developers for the iOS platform, as they can build stronger, better apps on updated versions of the software, but limit compatibility for those running old versions of iOS. Although the level of new activations on Apple’s iOS 6 were probably not as high as hoped, there was a small trend in updates as well as iPhone 5 purchases shortly after the Google Maps release.

Considering the magnitude of the chain of events following the release of iOS 6 and the iPhone 5, Apple is most likely feeling a sense of relief right now, with the absence of Google Maps on their native home screen. No longer do they need to pay licensing and other fees to keep a free version of the app on their devices, and they can also rest knowing that the pressure to continue updating their own map application has fallen. People are also enthused to see the availability of great map software in the App Store, and this will likely increase future mobile phone and even tablet sales worldwide. So, with the successful launch of Google Maps, Apple can now say they are again headed in the right direction.