Just about everybody in the developed world is aware of the battle between Apple Inc. and Google, but few know that a key part in Apple’s success is Google. Without apps developed by the search giant, many people may in fact feel that Apple products are obsolete. Controversy arose when Apple’s decision to drop Google maps in the iOS 6 update was announced. The new mapping software that came pre-installed on all iOS devices running iOS 6 brought many people more than frustration. Numerous customers refused to upgrade to iOS6 until a Google Maps app was available in the app store, and some analysts believed that the issue would limit iPhone 5 sales.

Within 48 hours of the launch, Google Maps received over 10 million iPhone downloads, pushing it to the top of Apple’s downloads chart. And although this is good news for Google, there is also a sense of relief for Apple as well. With a reliable maps application now available in the App Store, consumers are more likely to upgrade their iPhones, iPads, and iPod Touchs to the newest version of the operating system, iOS 6. Upon the release of Google Maps, Apple saw a slight trend in iOS 6 activations, but not quite to the scale they were probably hoping for. It is, however, estimated that a significant increase in upgrades will be seen by the end of the Holiday season.

Another native app that disappeared in the iOS update was the YouTube application – due to the end and non-renewal of a licensing agreement for YouTube on iOS devices. Though not as important as a dependable mapping app, there was still disappointment among those who enjoyed spending hours watching their favorite channels or funny cat videos. The loss of this app just marks another endpoint in the once close relationship between Apple and Google. 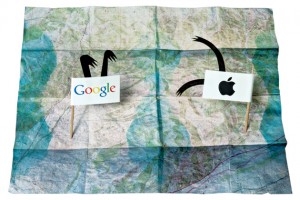 After months of waiting for both an iPhone and iPad version of the standalone YouTube application, Google now has more flexibility with the app. This allows them to update it more often, and more importantly integrate their now famous ads at the beginning of videos. But what seems like bad news for Apple could actually save them some money. No longer must they pay licensing fees to Google in order to keep a YouTube app native to their mobile operating system. And assuming that Google would like to keep their video service available to the millions of iOS users, Apple has no need to pay its own developers to create an app for a direct competitor.

Although Apple is one of the most successful companies in the world, their largest competitor plays an enormous role in their success. It is hard to imagine using an iOS device with absolutely no integration from Google services such as search, YouTube, Maps, Google Earth, etc. The once friendly companies have battled over mobile device market share for some time now, but they still have uncut ties. Google brings Apple customers, and in return, Apple brings Google revenue. And just because they are constantly starting and finishing lawsuits with each other, don’t expect these two companies to go their separate ways just yet.